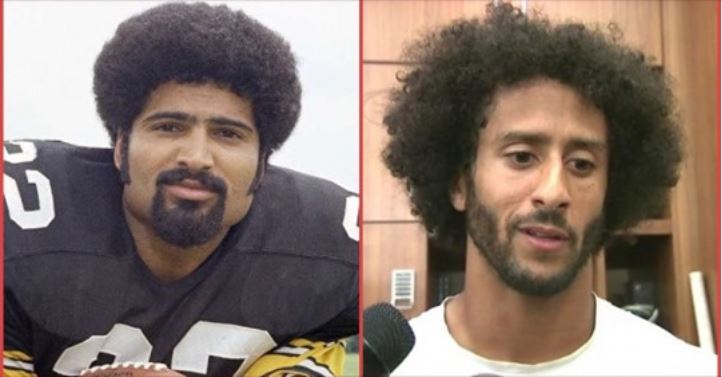 NFL Hall of Famer, the great Franco Harris says national anthem protests would not have been tolerated in his day. In fact he inferred that you would get your ass beat if you pulled that garbage that Kaepernick and all these other overpaid jackasses are doing now-a-days.

In an interview with Mediate, Harris was asked about NFL players refusing to stand for the national anthem, a demonstration that was started last season by Colin Kaepernick to protest police brutality and racial inequality.

During the 2017 NFL preseason, other players like the Seattle Seahawks’ Michael Bennett and the Oakland Raiders’ Marshawn Lynch had similar protests of their own, Fox News reports.

Harris said that even though America has social issues that need to be dealt with, it’s important to respect the country by standing before the flag.

Harris said that America certainly has social issues that must be dealt with, but Kaepernick and other players should find a different platform for their protests.

“If someone has a certain stance that they want to take, that’s fine,” Harris said.

“When he puts on that suit, when he steps out on that field, now it’s more than just him. It’s his teammates, it’s the NFL, and it’s the fans.”

Harris went on to say that the team must come first, and coaches and teammates in his day would have slammed Kaepernick over his protest.

Harris continued to say Kaepernick is free to voice his personal position, but he could’ve done so on different platform and without dragging the football league into it. As they continued to discuss, Mediaite columnist John Ziegler asked about how Harris’ coaches and teammates would’ve confronted Kaepernick over his protest.

“We had two of the meanest guys in football, who I think would’ve dealt with it that way, and that would’ve been Joe Greene and Jack Lambert,” Harris said.

AMERICA’S FREEDOM FIGHTERS reported that Pro Football Hall of Famer and Cleveland Browns legend Jim Brown slammed current football players who choose to protest during the playing of the Star Spangled Banner, saying “I don’t desecrate my flag and my national anthem.”

Brown, who fought for social causes throughout his career, told ThePostGame.com he empathizes with jobless quarterback Colin Kaepernick, who began the trend of kneeling during the anthem last season when he played for the San Francisco 49ers. But Brown said Kaepernick and other players who demonstrate – such as a dozen Cleveland players who knelt Monday – are going about their crusade the wrong way.

It’s one thing to take a stance against police brutality and for the equal treatment of minorities as Kaepernick has. But it’s another to do it in a way that mobilizes others to rally behind you.

A few days ago AMERICA’S FREEDOM FIGHTERS reported that the legendary George Foreman took down Colin Kaepernick and Kevin Durant on a podcast Monday, saying neither the football nor basketball star is patriotic.

Foreman, 68, spoke out on the “Offended America” podcast, offering that those who refuse to stand for the national anthem, like Kaepernick, are just looking for attention.

“I love the United States,” Foreman said. “They [Kevin Durant and Colin Kaepernick] haven’t been brought up with people who were patriotic.”

He added, “A lot of people died so that they can have that privilege.”

Foreman said all athletes during his heyday were appreciative of the privileges to which they had been born.

“We came in the era we were patriotic. The greatest day of my life was when I put on the colors, representing the United States,” he said, referencing his time competing in the Olympics.

The former boxer also said during the podcast that he credits Trump for helping him out of his bankruptcy by sponsoring a Pay-Per-View fight in 1991.

Kaepernick remains a free agent, which has led to accusations of blackballing and calls for an NFL boycott.