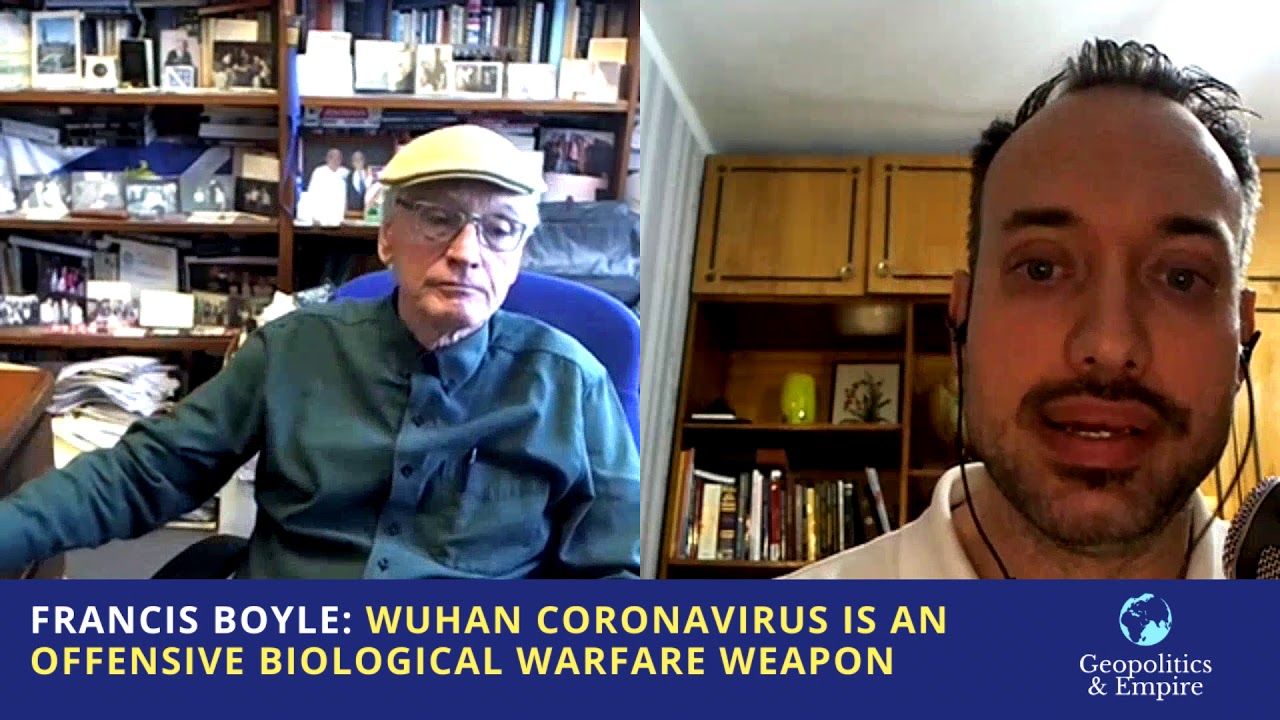 The Biological Weapons Anti-Terrorism Act of 1989 (BWATA) was drafted by University of Illinois international law professor Francis A. Boyle.[2] The law, known as it went through the U.S. Senate during the 101st U.S. Congress as S. 993, was introduced to the Senate on May 16, 1989.[3] The bill was sponsored by U.S. SenatorHerb Kohl (D–WI) and collected 15 co-sponsors on its way through the Senate.[3][4] An amended version of the bill passed the Senate in November 1989.[3] – Source

When this man claims that Coronavirus is a bioweapon, people need to at least listen to what he has to say.

Francis Boyle is a professor of international law at the University of Illinois College of Law. He drafted the U.S. domestic implementing legislation for the Biological Weapons Convention, known as the Biological Weapons Anti-Terrorism Act of 1989, that was approved unanimously by both Houses of the U.S. Congress and signed into law by President George H.W. Bush.

In an exclusive interview given to Geopolitics and Empire, Dr. Boyle discusses the coronavirus outbreak in Wuhan, China and the Biosafety Level 4 laboratory (BSL-4) from which he believes the infectious disease escaped. He believes the virus is potentially lethal and an offensive biological warfare weapon or dual-use biowarfare weapons agent genetically modified with gain of function properties, which is why the Chinese government originally tried to cover it up and is now taking drastic measures to contain it. The Wuhan BSL-4 lab is also a specially designated World Health Organization (WHO) research lab and Dr. Boyle contends that the WHO knows full well what is occurring.

Dr. Boyle also touches upon GreatGameIndia‘s exclusive report Coronavirus Bioweapon – where we reported in detail how Chinese Biowarfare agents working at the Canadian lab in Winnipeg were involved in the smuggling of Coronavirus to Wuhan’s lab from where it is believed to have been leaked.

Zero Hedge, has this…

Dr. Boyle’s position is in stark contrast to the mainstream media’s narrative of the virus being originated from the seafood market, which is increasingly being questioned by many experts.

In a video accompanying his post, Cotton explained that the Wuhan wet market (which Cotton incorrectly referred to as a seafood market) has been shown by experts to not be the source of the deadly contagion.

Cotton referenced a Lancet study which showed that many of the first cases of the novel coronavirus, including patient zero, had no connection to the wet market — devastatingly undermining mainstream media’s claim.

“I would note that Wuhan also has China’s only bio-safety level four super laboratory that works with the world’s most deadly pathogens to include, yes, coronavirus.”

China claimed—for almost two months—that coronavirus had originated in a Wuhan seafood market. That is not the case. @TheLancet published a study demonstrating that of the original 40 cases, 14 of them had no contact with the seafood market, including Patient Zero. pic.twitter.com/PdgqgHjkGy

Such concerns have also been raised by J.R. Nyquist, the well known author of the books “Origins of the Fourth World War” and “The Fool and His Enemy,” as well as co-author of “The New Tactics of Global War”. In his insightful article he published secret speechs given to high-level Communist Party cadres by Chinese Defense Minister Gen. Chi Haotian explaining a long-range plan for ensuring a Chinese national renaissance – the catalyst for which would be China’s secret plan to weaponiz viruses.

The third data point worth considering: the journal GreatGameIndia has published a piece titled “Coronavirus Bioweapon – How China Stole Coronavirus From Canada And Weaponized It.”

The authors were clever enough to put Khan’s Virology Journal article together with news of a security breach by Chinese nationals at the Canadian (P4) National Microbiology Lab in Winnipeg, where the novel coronavirus was allegedly stored with other lethal organisms. Last May, the Royal Canadian Mounted Police were called in to investigate; by late July the Chinese were kicked out of the facility. The chief Chinese scientist (Dr. Xiangguo Qiu) was allegedly making trips between Winnipeg and Wuhan.

Here we have a plausible theory of the NCoV organism’s travels: first discovered in Saudi Arabia, then studied in Canada from whence it was stolen by a Chinese scientist and brought to Wuhan. Like the statement of Taiwan’s intelligence chief in 2008, the GreatGameIndia story has come under intensive attack. Whatever the truth, the fact of proximity and the unlikelihood of mutation must figure into our calculations.

It’s highly probable that the 2019-nCoV organism is a weaponized version of the NCoV discovered by Saudi doctors in 2012.

Meanwhile, the mainstream media’s narrative still maintains that the origin of the 2019 Coronavirus is the Wuhan Seafood Market. After GreatGameIndia published the story on Coronavirus Bioweapon – not only were our databse tinkered with and our reports blocked by Facebook on the flimsy reason that they could not find GreatGameIndia Facebook page, but the report itself was viciously attacked by Foreign Policy magazine, PolitiFact (known widely as Facebook’s propaganda arm) and BuzzFeedNews.

So do you think that a Wuhan Seafood Market is the source?

Or is something more nefarious at play?

I believe in coincidences less every day.

With that said, Fukushima continuing to radiate our oceans could certainly create some seafood that is not worth eating.

The dangers that radiation contaminated seafood might contain are virtually endless, and if a virus could survive Fukushima it certainly shouldn’t be taken lightly.

Honestly, I don’t care where it came from YET, but if I were to hypothesize I would think that Dr. Boyle is on the right track.

We can figure that out later.

First, we have to stop it before it kills millions.

Oh wait, this just in…

That was rather quick.

Like I said, I don’t believe much in coincidences and happenstance these days.

But let’s stop it and then see if we can bring some justice to those who may have started it later.

Hopefully the vaccine they will soon be pushing doesn’t kill more people than the virus.