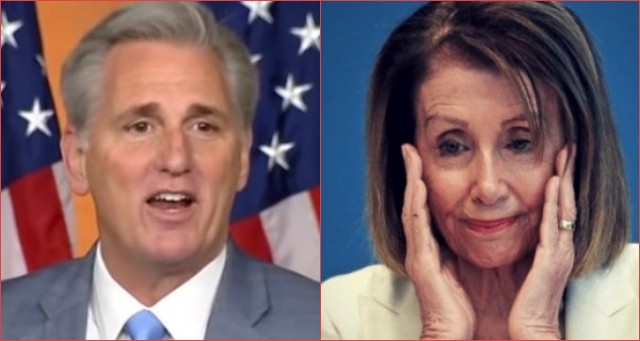 (TNS) House Minority Leader Kevin McCarthy intimated during an interview Sunday that his California Democratic constituent who is currently in charge of the lower chamber might not be by the end of the next election cycle.

In an interview with Fox Business Network’s “Sunday Morning Futures,” McCarthy told host Maria Bartiromo that there’s an “internal civil war” taking place within the Democrat Party, in part due to her inability to reign in the growing, increasingly influential Marxist faction.

He also hit Pelosi with a counter-fact regarding her claim that President Donald Trump “is impeached for life.” He’s also going to be “acquitted for life” after the Senate votes to clear him of two impeachment articles by Wednesday.

“We had confidence- we have confidence in our case that it is impeachable, that this president is impeached for life, regardless of any gamesmanship on the part of Mitch McConnell, however, that could still come to bear,” Pelosi told ABC News’ George Stephanopoulos last month. “We’re still confident in the impeachment and we think it’s enough testimony to remove him from office.”

But McCarthy put Pelosi and her party on notice Sunday morning.

“The president’s going to be acquitted for life. Nancy Pelosi needs to know that but what you’re going to see right now is a real change in the Democratic Party,” McCarthy explained.

Then he addressed what many Americans have seen brewing for some time now: Growing division within the Garbage Party to figure out what it wants to be from here on — the party of socialism, Marxism, and Communism, or an American party with liberal views.

“There are two internal Civil Wars going on right now: There’s many Democrats in the House telling them that they’re very upset with the speaker and with Adam Schiff,” McCarthy said, referencing the lead impeachment manager and current chair of the House Intelligence Committee.

He said that many Democrats are upset with how Pelosi handled impeachment by pursing it “too soon” and not being “fair in the process.”

“And she changed the message every single week,” he added.

McCarthy said Democrats are not happy with Schiff because he failed to inform his Democratic caucus and allies on the Judiciary Committee he had met with the Ukraine whistleblower.

McCarthy said that Schiff’s own inability to be honest even with his own party has really widened the internal rift.

WATCH:@GOPLeader: “The President’s going to be acquitted for life – Nancy Pelosi needs to know that.” pic.twitter.com/EWn88te5sh

“You’re going to see a real change in the Democratic Party,” McCarthy predicted.

No doubt we’re already seeing it. The Marxist wing of the party is young, energetic, and not in any mood to cede influence or ground to the establishment wing. We saw that again just last week when Rep. Rashida Tlaib (D-Mich.) booed Hillary Clinton (eventually apologizing, but it was forced).

But she didn’t just boo Hillary; she booed her at a campaign rally for Sen. Bernie Sanders, clearly the most Left-wing of the 2020 Democratic presidential contenders.

Bottom line- they are a freaking mess.