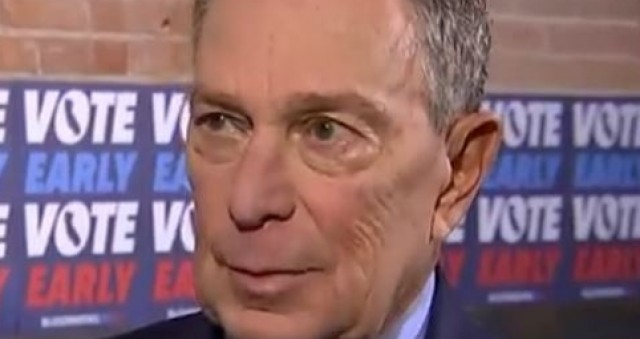 Mike Bloomberg, the former mayor of New York City and contender for the Democratic presidential nomination, released an anti-Trump campaign advertisement that included footage from the Obama era.

The Bloomberg campaign released an ad that was meant to highlight unflattering events that have occurred during the Trump administration, such as the white nationalist march in Charlottesville, Virginia, the aftermath of a Florida school shooting, the Brett Kavanaugh hearings, and immigration enforcement at the U.S.-Mexico border.

“America demanded change and change is what we got,” a narrator said in the ad, which then led to a montage of footage, supposedly all taken during the Trump presidency.

Donald Trump said he was going to bring change to this country.

The campaign took direct aim at the Trump administration’s immigration enforcement measures, clipping images of Border Patrol agents doing their job and featuring footage of detained migrants. However, a review by the Daily Caller News Foundation found that one still image used in the ad was taken in 2014 — during the Obama administration.

The DCNF compared this image to a photo taken by Ross D. Franklin for The Associated Press in June 2014. The picture, which the DCNF obtained from Getty Images, was taken inside a Customs and Border Protection facility in Nogales, Arizona. Franklin’s picture can be seen by clicking HERE.

A simple comparison of the two images can prove that they are, in fact, the same.

The DCNF reached out to Julie Wood — a spokeswoman for the Bloomberg campaign — about the image, but did not receive a response.

This is not the first time Obama-era footage of caged migrants has been mistakenly attributed to the Trump administration. In an announcement about “inhumane treatment at the border” in July 2019, Democrats on the House Oversight Committee tweeted out the same Getty image. They deleted their tweet following online ridicule.