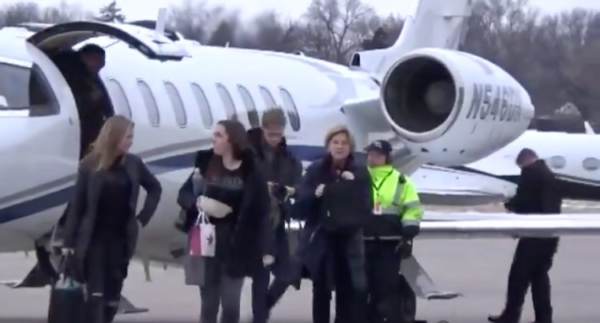 These high-profile climate change freaks are most often hypocrites.

Elizabeth Warren should be ashamed of how she just harmed our planet.

After all, we only have 11 years left to save it.

Elizabeth Warren just got busted costing the planet she is trying to save some valuable time!

2020 Democrat hopeful and carbon emissions hawk Elizabeth Warren tried to hide from the cameras after she got caught exiting a private plane this week.

Warren tried to hide behind one of her staffers after she realized the cameras were rolling and caught her exiting a (gasp) private plane.

The fake Indian, who constantly rails against income inequality and engages in class warfare, quickly walked out of site of reporters and didn’t answer any questions.

Climate change cult leader Elizabeth Warren warned people in September that we only have 11 years left to cut emissions in half or the world will end.

“We’ve got, what? 11 years Maybe…to cut our emissions in half,” Warren said during a CNN climate change town hall in September.

Elizabeth Warren is your typical hypocritical leftist: rules for thee, but not for me.

Most of the cult leaders don’t believe what the cult worshippers do.

If they do believe it, they simply believe that their carbon footprint is vital and those left by you and I are not.

Mostly they are full of crap and Elizabeth Warren is the latest in a long line to prove it.

Not only are they full of crap, they know the danger of letting it out.

These people are seriously not right.

I can’t completely confirm that rumor, but remember you heard it here first.

They don’t call us fake news for nothing. 😉