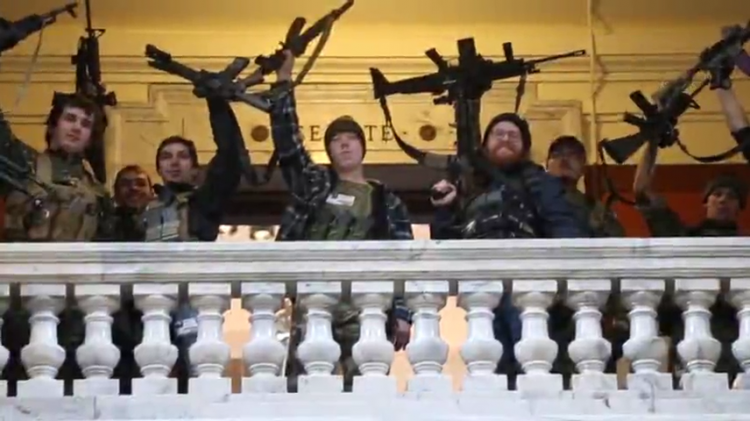 It seems that Kentucky didn’t garner the attention for their gun rally this past weekend that Virginia did earlier in the month.  Perhaps, that was due to the fact that the gun grabbers had bowed up so much and sought to propagandize the event.  In either case, overall, the Kentucky rally was barely covered in the media.

Even in the rain, people came out.

2A rally in Ky! Rain can’t stop this movement. pic.twitter.com/jHBme8wqeP

I’ve never felt safer at a gathering in my life. Also, got some ideas for a new AR build. Great rally Friday at the Kentucky state capitol! pic.twitter.com/nbJQcrGOZn

Of course, there are always bitter, angry people vying for attention, like little David Hogg, useful idiot and coward.

“This might be one of the most extreme forms of white privilege I’ve ever seen,” he tweeted.

This might be one of the most extreme forms of white privilege I’ve ever seen. https://t.co/J9us2bDbQP

To which I respond, that might be one of the most unAmerican tweets I’ve ever read.

He followed up with, “Let me get this strait, when the black panthers armed themselves against a white supremacist government they’re written off as dangerous criminal terrorists.  But the same people say when these guys use armed intimidation it’s patriotic resistance.
Sounds about white.”

Well, college boy, it’s “straight” and second, the rounds I’ve seen from the black panthers have a history of calling to murder white people.  David forgot to mention that, didn’t he?  Sounds about stupid.

Other anti-American, anti-constitutionalist gun grabbers made their own tweets attacking peacefully armed citizens exercising God-given rights without incident, but I won’t document those here, and I probably shouldn’t give Hogg a spot either, but I just want people to understand his racism coming out against white people, you know, the same color of skin he has?

The reports I found on the rally came out of the USA Today Network, all of them with degrading titles for those who stood for the Constitution and the people’s rights.

I love how the capitol clearly upheld the rights of the people, except for the whole metal detector thing in the first place.

Joe Gerth of the Courier-Journal tweeted a video showing security officers instructing armed rally-goers to go around the metal detectors while entering the capitol building.

Weirdest thing about guns in the Kentucky Capitol: if you have one, you’re told to walk around the metal detector. Others must pass through and get wanded. pic.twitter.com/Oqxl9hvl0I

David Cordrea writes at Guns in the News in commenting on the racist remarks of people like David Hogg:

A diversity of gun owners of color were at Richmond, dubbed in one deservedly viral meme the “worst white supremacist rally ever.”  It’s always been the right to keep and bear arms advocates fighting against infringements for all peaceable people. And that creates a bizarre cognitive dissonance the gun-grabbers ignore lest they be confronted with their own illogical disconnect: Accusing police of targeting blacks and then advocating police should be the “Only Ones” with guns.

And see what I mean about “strait” out of the communist playbook?

The point is made. We’d be spinning our wheels to try and include every politician, gun-grab group and “Authorized Journalist” trying to virtue signal how awful, racist and terror-spreading they find the Kentucky rights activists to be. One more example that stands out though and merits mention is Rolling Stone, as it actually complains:

EVEN THOUGH NO LAWS WERE BROKEN? A BLOODTHIRSTY LOT, AREN’T THEY?

That would only have been appropriate had the gun owners been doing something violent and victimizing others, but it’s not like they’re “MTA fare protesters” or anything (Hint to the antis: Ours is the side that picks up litter after we peaceably exercise our First Amendment-recognized right to petition our representatives.)

It’s almost like the DSM is hysterically publicizing this hoping it will attract some crazy — who will invariably turn out to be one of theirs — to go in and prove them right.

Codrea then writes about the one thing that was intentionally left out of all of the reporting.

What this does more than anything is expose a larger point, the evil fallacy of “gun-free zones.” After all, if Americans can’t be trusted in the Capitol, or a campus, store, church or school while armed, we can’t be trusted with firearms anywhere. Right?

That is exactly the swindle the disarmament fanatics and the totalitarians-in-waiting behind them want most Americans to fall for.

And that’s why, if you’re one of “those” gun owners accusing the rally-goers of “making us all look bad,” consider this: With all the life-destroying edicts the collectivists are shoving in our faces now and threatening to do to us if they win big in November, sometimes revealing just who they’re trying to disarm by fraud and force is not only appropriate, it’s overdue. The fight we’re in is more than political, it’s existential. Be careful not to play into the hands of the enemy by making us all look divided and weak.

Codrea also praised Massie for being a true statesman.

“As an aside, Massie continues to prove himself to be the real deal, a politi…correction, a citizen representative who actually had his rating downgraded by NRA for being too pro-gun. As an aside, find some time to watch “Off the Grid” to get just a feel for the breadth of his knowledge and capabilities.”

Finally, like no one else can, Brian and High Impact Flix points out just what happened in the Kentuck Capitol that the mainstream media didn’t want you to see.