I was asked to write this piece for SonsOfLibertyMedia.com with reference to the attacks by Facebook against the site due to reports from decades-old veterans from CNN at LeadStories.com, a paid, third part, self-proclaimed “fact-checker” whose stories have been misapplied to the SonsOfLibertyMedia.com’s stories that have been publicized with specific references sourced while ignoring the myriad of corporate-controlled media’s, such as CNN, complete and documented fabrication of news.

So, with just a few references, I’m going to demonstrate how Facebook is not only violating law by hiding behind protections of the law for platforms while actually engaging in being a content provider.  There’s more to come on this on Monday with Jason Fyk, who will be a guest on The Sons of Liberty – YouTube to talk about his lawsuit that is currently in the Ninth Circuit Court of Appeals and is ready to take it to the Supreme Court.

OK, so currently, while Facebook is taking money from The Sons of Liberty for advertising, it is also quelling the reach of the same Facebook page that it is accepting money from, and attacking it with third party content that does not apply from more than two-decade-old veteran of the least trusted name in news CNN’s Alan Duke at LeadStories.com.

Additionally, Facebook has absolutely no mechanism for disputing their claims, which are false.

There are six examples and I will indicate how each of these are actually falsely applied to the articles mentioned in order to maintain a narrative and get LeadStories.com money.

The first story comes from our friend Michael Snyder.  Here’s how Facebook and LeadStories.com applied this to only further drive traffic and dollars to LeadStories.com. 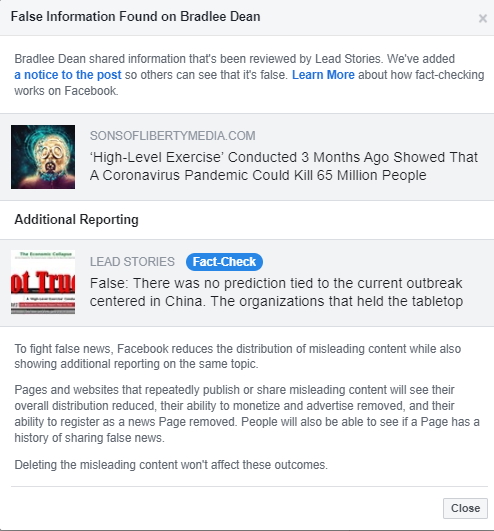 While LeadStories.com claims there was “no prediction” based on an after the fact statement from John Hopkins:

Recently, the Center for Health Security has received questions about whether that pandemic exercise predicted the current novel coronavirus outbreak in China. To be clear, the Center for Health Security and partners did not make a prediction during our tabletop exercise. For the scenario, we modeled a fictional coronavirus pandemic, but we explicitly stated that it was not a prediction.

No, I’m not going to link to LeadStories.com, which is what they want.  Furthermore, the statement went on to state:

Instead, the exercise served to highlight preparedness and response challenges that would likely arise in a very severe pandemic. We are not now predicting that the nCoV-2019 outbreak will kill 65 million people. Although our tabletop exercise included a mock novel coronavirus, the inputs we used for modeling the potential impact of that fictional virus are not similar to nCoV-2019.

OK, did you get that?  It’s not “prediction,” but it was somehow to “highlight preparedness and response challenges.”  Well, if you are creating a model of something, which they claimed to do, which obviously was to see the results (call it prediction or whatever), aren’t you, in essence, “predicting” a certain outcome?  Yes, you are.

In fact, not one occurrence of the word “prediction” is mentioned in the article that Facebook used LeadStories.com to label as “False Information,” “false news” and “misleading content.”  Rather, the context is clear, for anyone that actually reads the content, that the model was constructed for the clear purpose of discovering results.  Otherwise, what is the purpose?  Even John Hopkins’ own statement leads to that conclusion, despite claiming “it was not a prediction.”

The second story also comes from Michael Snyder at SonsofLibertyMedia.com. 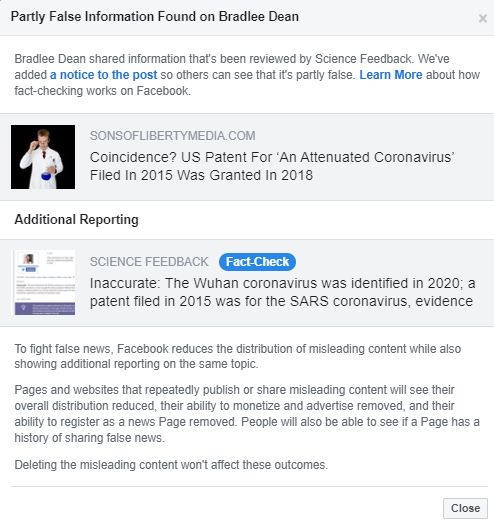 This is not “partly false information” as Facebook and LeadStories.com claim.

Notice our headline that mentions  “an attenuated coronavirus.”  While LeadStories.com and Facebook would have you believe we are putting out false news, the reality is that the source mentioned in our article mentioned coronavirus 159 times while mentioning SARS just eight times.  It’s not “partly false,” it’s totally true, including the headling.

Then, there was the same nonsense and lies tied to an article that we don’t even know what they are referencing as the first one above. 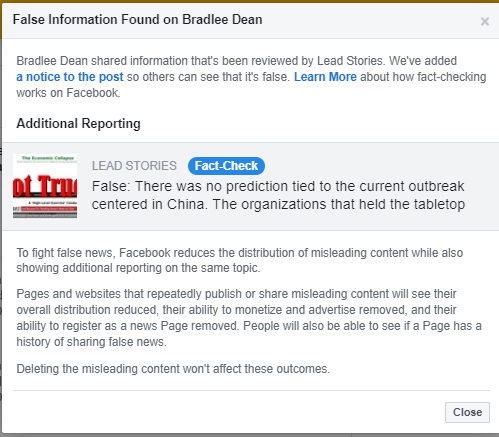 Ah, yes, and then the Virginia crisis actors nonsense put out by the corporate and CIA-controlled media.

This one I am very familiar with since not only did I attend the Lobby Day rally in Richmond, Virginia, but I also authored the article.

While Facebook and LeadStories.com claims this is “false information,” “false news” and “misleading content,” which they also disseminate to users, which makes it libel and allows us to target them in civil court for damages, nothing in my headling or article is false.

The casting call did come ahead of Lobby Day.  Neither Facebook nor LeadStories.com disputes this fact.

While I referenced that crisis actors and active shooter training has always accompanied mass shootings, I never said this was that.  I merely referenced readers to that fact.

Did I theorize that people might call in at a high rate of money per day and possibly be sent, yes, but that was clearly “theorized.”

Therefore, Facebook limited our reach, even though we were paying them for advertising by misapplying, or maybe intentionally, applying LeadStories.com’s article about video to our article. 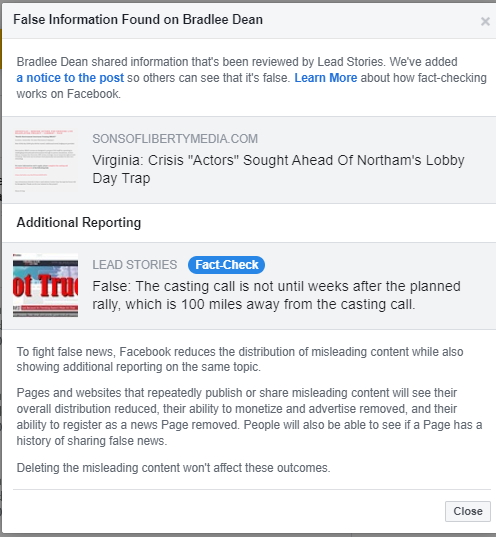 The next example I also authored.  Please note the difference of what Facebook and LeadStories.com promote and what my title and information contained.

How is that “false information,” “false news,” or “misleading content”?

In fact, I quoted her boyfriend at the time saying it had nothing to do with that, even though as someone who doesn’t know either of them, I may have questioned that.  This was a targeted response to our site by Facebook and LeadStories.com 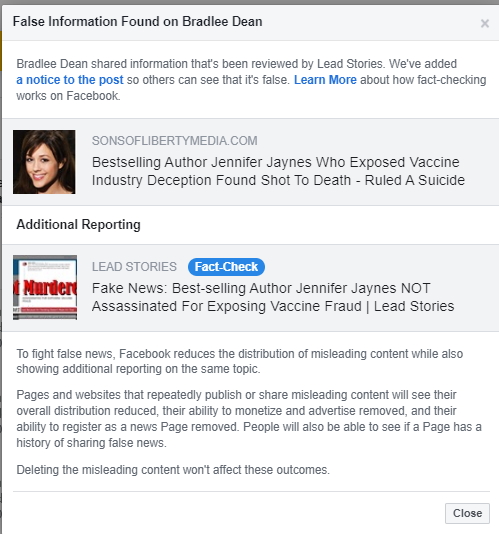 Finally, the last example I will address comes from my good friend Dean Garrison of DCClothesline.com and DCDirtyLaundry.com.

I simply retitled his article “Are The Impossible Whoppers from Burger King a Part Of Population Control“?

It was a questioning headline, nothing more, nothing less.

LeadStores.com and Facebook decided to label it “false news,” “false information,” and “misleading content,” by claiming “Inaccurate: Impossible Whopper contains no estrogen, will not lead to men growing breasts if eaten in moderation.”

Now, Dean did quote an article speaking of men growing breasts from eating too much of this, it appears LeadStories.com sought to make an issue of this and covered their backsides with the caveat, “if eaten in moderation.”

What neither Facebook nor LeadStories.com tell you in their propaganda, and propaganda is what it is, that if you consume large amounts of the impossible Whopper, which is a genetically modified organism filled with calorie-dense oils, it can make a man grow breasts if eaten in overwhelming quantity.  Thus, the qualifier. 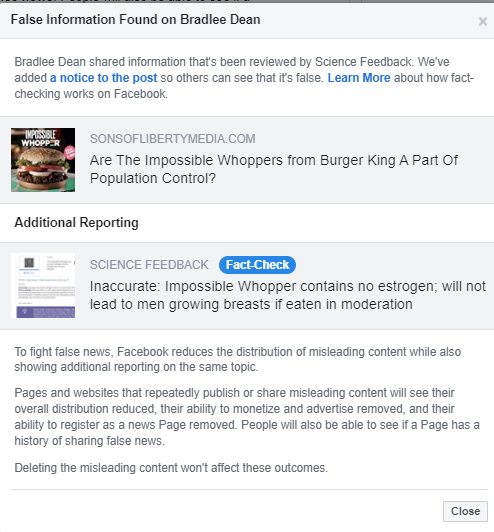 This information will also be contained in our upcoming lawsuit against Facebook, and I have no doubt that LeadStories.com and Alan Duke will soon face libel over these issues as well.