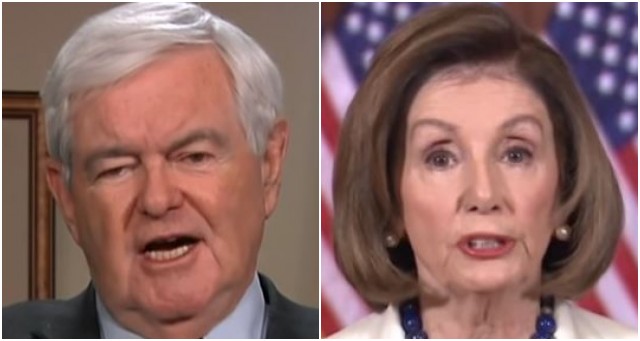 (TNS) Following President Donald Trump’s highly charged, emotional State of the Union Address Tuesday, House Speaker Nancy Pelosi of California displayed the ultimate sign of disrespect not only to the president but to the office of the President and to the American people.

On live television, she tore up the copy of the address that the president gave her at the outset.

And while that gesture no doubt was a play to her party’s perpetually angry base, it isn’t something she should get away with, according to former House Speaker Newt Gingrich (R-Ga.)

“As Speaker of the House for four State of the Unions by a President of the other party I am disgusted and insulted by the viciously partisan action of Nancy Pelosi tearing up the speech,” Gingrich tweeted late Tuesday. “She isn’t clever or cute her childishness insults our American traditions – should be censured.”

As Speaker of the House for four State of the Unions by a President of the other party I am disgusted and insulted by the viciously partisan action of Nancy Pelosi tearing up the speech.She isn’t clever or cute her childishness insults our American traditions -should be censured.

Meanwhile, the White House tweeted out a short summary of the contents of the speech that Pelosi “ripped up.”

One of our last surviving Tuskegee Airmen.

The survival of a child born at 21 weeks.

The mourning families of Rocky Jones and Kayla Mueller.

A service member's reunion with his family.

Following the act and as she filed out of the chamber, a Fox News correspondent asked her why she did it, to which she responded, “Because it was the courteous thing to do considering the alternatives. I tore it up. I was trying to find one page with truth on it. I couldn’t.”

She didn’t mention what the “alternatives” were.

Before his address, the president appeared to snub Pelosi’s handshake, but it was after she omitted the customary phrase as Trump entered the chamber, “I have the high privilege and distinct honor of” introducing the president of the United States and simply introduced him as “the president of the United States.” And, of course, all of that was preceded by a four-month impeachment odyssey in which Democrats, led by Pelosi, attempted to remove Trump from office for the ‘high crime and misdemeanor’ of conducting foreign policy.

Gingrich, no doubt, understands that the Democrat-controlled House isn’t going to ‘discipline’ their leader — for this or anything else — so really, all he’s doing is getting his sentiments on record.

But if what transpired Tuesday night between Democrats, this president and his Republican Party doesn’t prove how irreconcilable our differences really are as a country with a two-party system, nothing will.