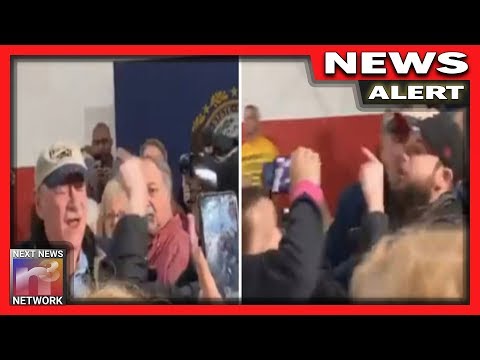 Shame on Americans for accusing Uncle Joe Biden of such barbarism. 😉

I think the only person that might not know Joe Biden is a pedophile, is Joe Biden himself.

I think the correct scientific term is “try”sexual.

Crazy Joe will “try” anything.

Put that with your gender classifications libtards.

The Daily Caller has this:

A protester interrupted an event for former Vice President Joe Biden in New Hampshire Tuesday, apparently yelling that Biden should “answer” for the “women and children” he’s groped.

The chaotic interaction can be seen in a video posted by McClatchy reporter David Catanese.

Protestor interrupts @JoeBiden at Nashua event screaming “Answer for the women and children you groped!” pic.twitter.com/h0pgDDsewy

Some Biden supporters appear to yell at the heckler and try to get him out of the event.

Biden has been previously criticized for his touchy behavior with women and children. The former vice president has repeatedly been heckled and trolled at his campaign events. (RELATED: Heckler Interrupts Biden’s Book Tour, Accuses Him Of Molesting Children)

In December, a heckler asked him about corruption in Ukraine, which Biden ignored. At another campaign stop the same month, someone yelled at Biden, “Don’t touch kids, you pervert!”

It is so sad that Democrats are so blinded by political promises that they still accept and support a man like Joe Biden.

He isn’t wildly popular but he is still part of the team.

Now other Biden family secrets are coming to light.

If you think that Joe and Hunter are the only Bidens to benefit from questionable business dealings, you’d be very wrong.

He lost to an open homosexual, a fake Indian and a known communist.

There is no punchline Joe.

If you had 4 opponents, instead of 3, you would have likely finished 5th place.

He’s more evil than a pervert, a liar and a communist.

Because Joe Biden is like a bizarre mix of all three.

When you are so evil that Democrats reject you, it’s time to give up.