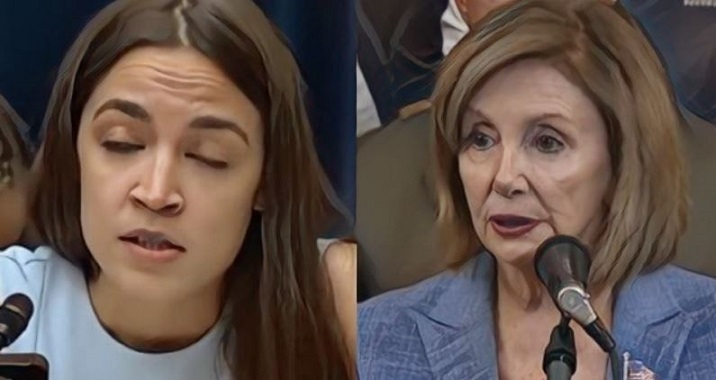 For decades, Democrats have accused Republicans of “racism” for opposing certain legislative initiatives or just whenever they believe use of the term will score political points with the electorate and the blatantly biased “mainstream” media.

But now, one of their own has accused another Democrat of being a racist, and the party is reaping what it has sown.

Earlier this week, House Speaker Nancy Pelosi (D-Calif.) criticized she who feels she is beyond criticism — the self-anointed Alexandria Ocasio-Cortez (D-N.Y.) — and her trio of Alt-Left Marxists, Reps. Rashida Tlaib (D-Mich.), Ilhan Omar (D-Minn.), and Ayanna Pressley (D-Mass.) — after tiring of the freshmen ‘democratic socialists’ and their resistance to Democratic Party policy and legislative priorities.

In an interview, Pelosi told The New York Times that “all these people have their public whatever and their Twitter world, but they didn’t have any following. They’re four people, and that’s how many votes they got.”

For that, AOC pulled the race card on Pelosi, claiming that the Speaker’s criticism wasn’t based on anything other than a disdain for ‘women of color’ who were elected in November. She told The Washington Post that the “persistent singling out” by the speaker was “outright disrespectful” and affected “newly-elected women of color.”

As you can imagine, the party faithful circled their wagons around their leader because the reality is, the bulk of Democrats in the House are tired not just of Ocasio-Cortez’s outsized attention by the media, but her lack of legislative gravitas, experience, and ability to be a loyal foot soldier at least until she has more legislative experience than experience tending bar in New York.

House Democrats and their aides are quickly losing patience with Rep. Alexandria Ocasio-Cortez over her office’s nonstop sparring with House Speaker Nancy Pelosi and other long-serving members, suggesting the speaker’s dismissive comments toward her may represent the view of a growing section of the caucus.

“She is a complete fraud,” one senior Democratic source told Fox News on Friday, succinctly summing up members’ frustration.

The last straw, for some, was the lawmaker’s claim that Pelosi was uniquely disrespectful to minority congresswomen. One senior lawmaker, who is black, scorched Ocasio-Cortez on Thursday for allegedly using the race card against the speaker, calling her comments “so inappropriate.” Some lawmakers have even turned the tables, arguing that a group aligned with her is targeting black lawmakers for potential primary challenges in questioning those comments.

“Her peers do not take her seriously,” the senior Democratic source said Friday, adding: “They think it is absurd to call the speaker racist. Offensive and absurd.”

Now, take this into consideration as well: A Democratic source is using Fox News to defend Speaker Pelosi, the one news network most Democrats dismiss as unserious, unreliable, and biased against them.

Rep. William Lacy Clay (D-Mo.), a member of the Congressional Black Caucus, blasted Ocasio-Cortez, slamming her “inappropriate” suggestion that Pelosi is singling out the New Yorker and her “squad” of fellow freshman because of their race. He also spoke to Fox News Thursday.

“It was such a weak argument to say she was being picked on and that four women of color were being picked on by the speaker,” he said. “It tells you the level of ignorance to American history on their part as to what we are as the Democratic Caucus.

“It is so inappropriate. So uncalled for. It does not do anything to help with unity. It was unfair to Speaker Pelosi,” he added.

The Dem source who spoke to Fox News went onto add that Ocasio-Cortez has “no power” and despite her large Twitter following, she’s still just from a small district in New York and that is who she truly represents.

“She is a nobody. She is a freshman member of Congress with no power. She is not worth the speaker’s brainpower,” the source said — accusing her of starting “needless distractions from serious issues” while skipping meetings and conference calls in favor of media interviews, tweets and “glamour.”

“It’s going to take a process of maturing for those freshman members. They will have to learn to be effective legislators,” Clay noted further. “It shows their lack of sensitivity to racism. To fall back on that (trope) is a weak argument. It has no place in a civil discussion.”

Well, it is a weak argument, but again, Democrats — and especially Democrats who are minorities — use it against Republicans All. The. Time. — and that’s okay. But it’s not okay when a Democrat of color accuses a white Democrat of the same thing?

Yeah, okay. But Clay’s concerns have much more to do with political pragmatism. Calling out Pelosi for ‘racism’ — or whatever — “shows [the Squad members] have no sensibility to different members from our caucus. Some come from red districts and those are the ones who gave us the majority. We need them all,” he said.

“In this building, it is about how many others you can bring along to your side. She maybe has two members—sometimes four,” the source told Fox Newsregarding AOC’s neophyte status.

The Squad hates being told to sit down by old party members whom they believe haven’t done enough — or anything at all — to advance the cause of America-hating Marxism, which is what they exist and strive for.

So anyone who believes this Democrat civil war is going to abate anytime soon is mistaken. And if Republicans retake control of the House next year, as some think is likely thanks to Democrat infighting, then the gloves will come off and the ‘democratic socialist’ wing of the party will go all-out blaming the old, white, establishment caucus of the party for its losses.

And then? We might just see the end of the modern Democrat Party as it splinters into various factions of Left, far Left, and anarchy.