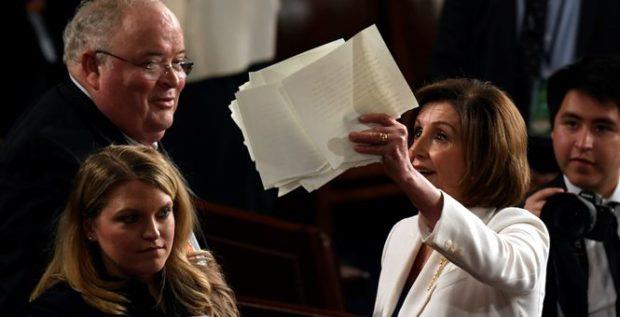 She ripped off a CNN reporter’s head for suggesting that her SOTU stunt had backfired.

House Speaker Nancy Pelosi held a press conference on Thursday and used her platform to once again attack President Trump.

Pelosi lashed out at CNN reporter Manu Raju after he asked her if ripping up Trump’s SOTU speech sent the wrong message.

Pelosi slammed her hand on the lectern several times as she yelled, “I don’t need a lesson from anybody!”

“Did you step on that message [taking the high ground] by tearing up the State of the Union?” Manu Raju asked.

“I tore up a manifesto of mistruths. It’s very hard for us to get you to talk about the issues that we are working on,” Pelosi said slamming her hand on the lectern.

“It was necessary to get the attention of the American people, to say this is not true…And I don’t need any lessons from anybody, especially the president of the United States, about dignity.”

Lending legitimacy to the CNN reporter’s question, it is also being reported that many Dems are done and demanding she step down as speaker.

House Speaker Nancy Pelosi may have gone too far when she ripped up President Donald Trump’s State of the Union speech after he was done giving it on Tuesday, even for Democrats.

According to the Daily Wire, a prominent congressman and a Democratic law professor have come forward and are now demanding Pelosi step down as Speaker for her behavior.

Rep. Lee Zeldin apparently was taken aback by Pelosi’s post-speech move and wrote: “Nancy Pelosi should step down as Speaker. I’m confident that the American public will be directly sending her that message themselves later this year if she doesn’t read the tea leaves herself and resign on her own terms today. It’s time.”

The Daily Wire also noted that George Washington University Law professor Jonathan Turley joined Zeldin by noting that in all his years, he had never seen such open contempt for a member of the opposite party and that Pelosi had crossed a line, even going so far as to call her a troll:

Turley wrote about the first time that he walked onto the floor of the House of Representatives 44 years ago, saying, “The country was deeply divided, but both parties maintained the tradition of civility and decorum. I was struck how members, even in the heat of furious debates, would not attack each other by name and followed rigid principles of decorum. They understood that they were the custodians of this institution and bore a duty to strengthen and pass along those traditions to the next generation.”

Turley continued, “At that moment, she represents the House as an institution — both Republicans and Democrats. Instead, she decided to become little more than a partisan troll from an elevated position. The protests of the Democratic members also reached a new low for the House. Pelosi did not gavel out the protest. She seemed to join it.”

“It was the tradition of the House that a speaker must remain in stone-faced neutrality no matter what comes off that podium. The tradition ended last night with one of the more shameful and inglorious moments of the House in its history. Rather than wait until she left the floor, she decided to demonstrate against the President as part of the State of the Union and from the Speaker’s chair. That made it a statement not of Pelosi but of the House,” Turley concluded. “For those of us who truly love the House as an institution, it was one of the lowest moments to unfold on the floor. That is why I argue in the Hill that, if Pelosi does not apologize and agree to honor the principle of neutrality and civility at the State of the Union, she should resign as speaker.” 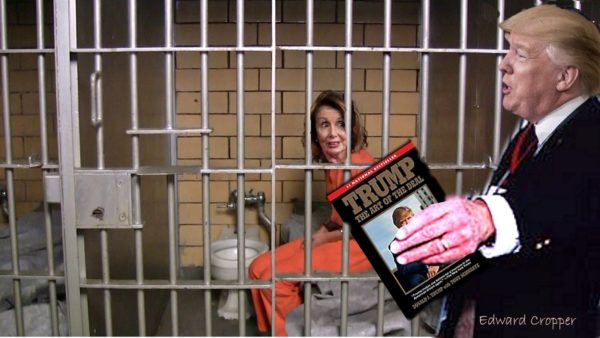 But since no place officially exists, that is our secret. 😉

Pelosi is a woman that is clearly obsessed and power-tripping in her old age.

I think some Democrats now clearly see what Pelosi has done to their party.