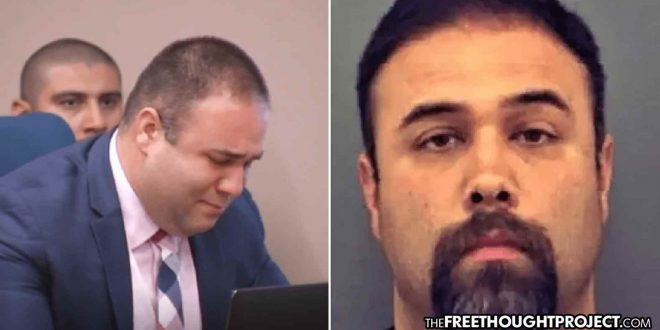 El Paso, TX — Police, we are told, are the ones we call when we are in trouble and need help. However, often times, “help” is the last thing people receive. Instead of serving the public, many police officers use their badge to prey on them instead. As the following case out of El Paso illustrates, they do so with seeming impunity and almost never go to jail for it.

Imagine for a moment that you are a victim of domestic violence. After being attacked, you call police for help and protection. However, when the police show up, instead of getting that help or protection, you get raped. Well, that is exactly what happened to one woman in Texas and the cop who raped her was found guilty of it.

Instead of going to jail, however, this cop who admitted to raping a victim of domestic violence, gets off essentially Scot free and will only have to serve 10 years of probation. This is a travesty of justice indeed—especially considering the fact that good people are serving life sentences in a cage for possession of marijuana.

On Friday, former El Paso police officer William Ollie Alexander received a 10-year suspended prison sentence on one count of sexual assault. He will spend exactly zero days in jail for the brutal sexual assault of a domestic violence victim he was tasked with protecting. He will also have to register as a sex offender for life.

According to authorities, on March 10, 2018, Alexander responded to a domestic violence call. Before leaving the woman, he gave her his phone number and told her to meet him several hours later. According to police, when she met him, he then kidnapped her, took her to a dark area near Mesa Street in West El Paso and raped her. These facts are undisputed, yet this monster will not be going to jail.

“I used to be trusting,” the woman said when asked by prosecutors how the incident has impacted her. “I thought everyone was nice and would be helpful, but now I know it is not like that. My intimacy went away for a long time. I didn’t want any guy around me. That’s not right. I shouldn’t have to feel that way.”

According to the report in the El Paso Times, as the woman cried as she testified about the impact the incident has had on her life, while Alexander began crying when his children came into the courtroom.

“Can you imagine having a daughter and having this happen to her?” she asked. “It would be awful. I don’t have kids, but Mom was overprotective, and I am going to be even more overprotective. This is something I will never forget. It was the worst day of my life.”

Despite her heart-wrenching testimony, the jury apparently blinded by the badge, sided with the rapist cop’s father who pleaded for no jail, out of fear for his son’s safety.

William Ollie Alexander III said he knows his son made a mistake, but he asked for his son to be sentenced to probation due to fear for his son’s safety in jail.

His attorneys. Dolph Quijano and Omar Carmona backed up his father’s plea, claiming that if this rapist cop was sentenced to jail, he would be killed.

“Any sentence you give Mr. Alexander could result in a death sentence,” Carmona said. “It doesn’t matter how many years. He will go to the penitentiary as former police officer. He is going to be there with gang members. Yes, it is because of his actions, but remember any prison sentence is a death sentence.”

By that insane logic, no cops should ever be sent to jail for the crimes they commit because it’s dangerous for them.

Perhaps this cop should’ve thought about these repercussions before he raped a domestic violence victim he was supposed to be helping. Or, perhaps he did, and he knew that he could rape her and no go to jail. Either way, the result is the same and this cop who raped an innocent woman who needed his help will be going home to his family as others rot in prison for victimless crimes and possessing substances deemed illegal by the state.