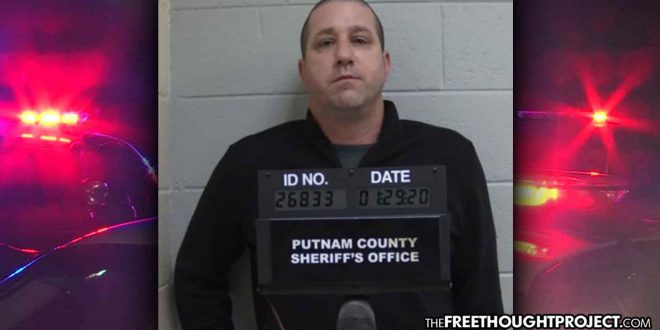 A simple Google search will illustrate how police officers are arrested for domestic violence on a near-weekly basis. It is also estimated that the incident rate for domestic violence is likely far higher than reported as many women stay silent out of fear of retaliation and the fact that their abuser’s brothers in blue will cover for them.

Proving the notion as to why women are scared to turn in their abuser husbands is a case out of Georgia this week. Amanda Perrault’s experience with her police officer abuser turned fatal after she reported him.

Amanda claimed her husband hit her in the face and pushed her out of their front door. This claim was backed up by the couple’s 8-year-old daughter who witnessed it and the fact that she had physical signs of injury to her body. The officer admitted he had been drinking and taking prescription medication prior to the alleged confrontation as well.

Michael Perrault was almost immediately released. On Monday, Amanda Perrault was found dead in her home, shot once in the head with a .380-caliber handgun.

When police questioned Michael Perrault, despite having a record of abusing his wife, he was not arrested and let go. He claimed that during a heated argument, Amanda Perrault produced the gun and quickly shot herself in the head before he could stop her.

“The bottom line is that he (Michael Perrault) says they were arguing and then she suddenly produced a gun and shot herself,” Sills told the AJC earlier this week. “I’ve either got a suicide or a murder,” Sills said. “That’s what I have. I mean it’s just that simple. It could be either way.”

After the GBI was called in to investigate, they quickly ruled it a homicide and arrested Michael on Wednesday night on a charge of murder.

The girl was at school during the time of her mother’s death, the newspaper reports.

“Apparently there was a lack of tranquility since the officer’s [family violence] arrest last week,” Sills told the newspaper. That is the understatement of the year.

As TFTP has previously noted, a report by a government-appointed watchdog group shows that most of the time, abusive officers who commit these crimes, do so with seeming impunity. The above case is a perfect example of why that is so.

A study conducted by the Domestic Violence Task Force called Domestic Violence in the Los Angeles Police Department: How Well Does the Los Angeles Police Department Police Its Own? revealed that performance evaluations of cops with a history of domestic violence are largely unaffected. The study of the LAPD examined 91 cases in which an allegation of domestic violence was sustained against an officer.

Sadly, it is estimated that many of the abused women never come forward as they know the likely result — which is getting shamed by the department for reporting it and potentially more abuse.

Diane Wetendorf, a specialist on police abuse, points out the most common fears when reporting police domestic abuse in her handbook:

If your abuser is an officer of the law, you may be afraid to:

These fears can make someone feel incredibly trapped and feel like there is no way out. If you or someone you know is a victim of this type of abuse we encourage you to no longer remain silent. As long as people go unpunished for their abuse, they will continue to dole it out. Leave the county, report it to the federal government, and get as far away from them as you can.