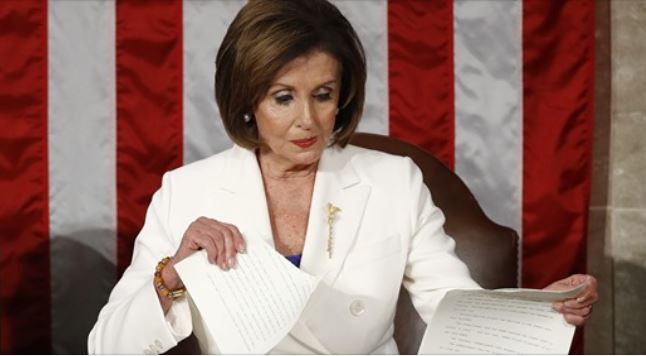 We warned you this is where we would wind up once Facebook decided to insert themsleves as the fact checking champions of the world to appease the Democrats after their humiliating loss in 2016.

Facebook made the mistake of ‘paying the pirate’ and allowing the left to bully them into policing speech and crushing the reach of the right of center political pages …. the few that they have not yet deleted, that is.

So it should come as no surprise that West Coast gangster, Nancy Pelosi’s team is now demanding Facebook remove the devastating video of Nancy flipping her ****, on national TV, after Trump’s epic State of the Union address.

Just to be abundantly clear, Pelosi waited until Trump’s speech was done to rip it up, she did not rip it after each guest was announced … in case you live under a rock.

The Hill quoted Pelosi spokesman Drew Hamill on her demand to take the video down.

Hamill also bitched on Twitter, “The American people know that the President has no qualms about lying to them – but it is a shame to see Twitter and Facebook, sources of news for millions, do the same…The latest fake video of Speaker Pelosi is deliberately designed to mislead and lie to the American people, and every day that these platforms refuse to take it down is another reminder that they care more about their shareholders’ interests than the public’s interests.”

The five minute, twelve seconds long video is currently pinned to the top of Trump’s Twitter page and has over 3.5 million views. TPUSA posted the video to its Freedom Fights TV page on Facebook Wednesday where it has over 1.2 million views.

Why is it that all these elitist liberals think we are too stupid to make up our own minds … or are they just scared of what would happen to them if we all were presented with the truth?