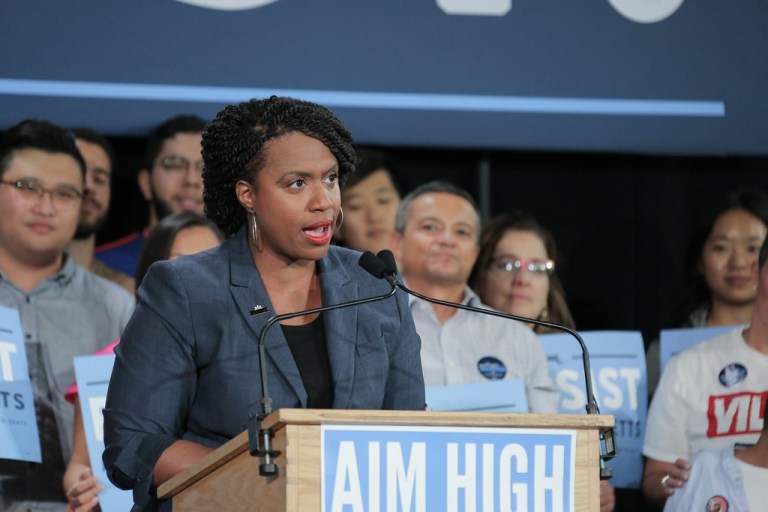 (TNS) Rep. Ayanna Pressley, freshman Massachusetts Democrat and member of “The Squad,” appears to believe that militant language and threats is the way to win over Americans who currently don’t believe in her open borders ideology.

That became evident during a conversation with NPR’s “Democracy Now,” as part of the nonprofit organization Rising Majority’s conversation with all ‘Squad’ members, including Reps. Alexandria Ocasio-Cortez (N.Y.), Ilhan Omar (Minn.), and Rashida Tlaib (Mich.).

Pressley said she and the others will “bring the fire” if the country doesn’t adopt her radical immigration positions, the Washington Examiner reported.

“As I said when we were at the border, we’re going to keep telling and elevating these stories with the hopes that you will see the light,” said Pressley. “And if you don’t see the light, then we will bring the fire. That’s just how it progresses.”

Pressley made the comments in a panel discussion at Howard University in Washington with Reps. Ilhan Omar, Alexandria Ocasio-Cortez, and Rashida Tlaib, all Democrats. Each of the members has vocalized frustration with President Trump’s immigration policies, with Ocasio-Cortez comparing the border detention centers to “concentration camps.”

Trump refers to the group of congresswomen as the Squad for their collective progressive policy positions emphasizing “Medicare for all,” a federal $15 minimum wage, and social justice issues.

“I never want us to lose sight of one, the power of movement-building, but secondly, the power of storytelling,” said the Massachusetts Democrat. “The way that we change laws is when we change hearts and minds.”

Pressley is the least known of the for Squad members, but her views are just as far to the Left of the real American mainstream as are the others, and that is especially true when it comes to illegal immigration and border law enforcement.

That said, the same as it was for Leftists throughout modern history, the Squad utilizes the language of revolution, not of persuasion, reason and rationality.

Like Democrats in Virginia pushing a raft of new gun control legislation, her party seems far less interested in ‘convincing’ people the Squad’s views are what’s right for the country than simply shoving their policies down everyone’s throats when they finally gain power.