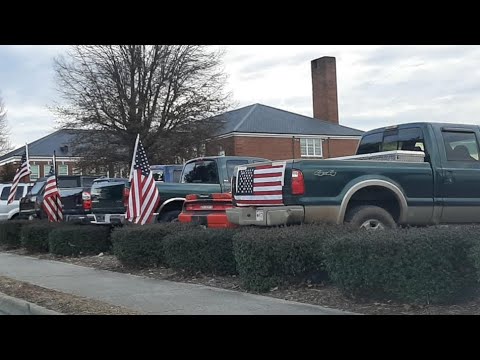 Students were told not to fly the American flag on their vehicles at a Virginia High School this week because the flag is potentially disruptive and offensive.

Last time I checked a little patriotism was a good thing, unless you ask an America-hating liberal.

What did they do?

Authority in our school systems has gone way left.

They have gone so far left that it’s hardly recognizable that these schools are American schools these days.

Here’s the full scoop from BTW21:

FRANKLIN COUNTY – Franklin County High School students showed up in unity on Tuesday displaying American flags on their vehicles after an administrator allegedly told them to remove them.

“My son called me from school saying that he saw an administrator around his truck and is now being called to the office,” the mother of one of the students said.

On Monday, the mother said her son and two of his friends were told they could no longer fly their American flag on their trucks because it was potentially “offensive” and “disruptive.”

She says she received a call from the school principal Jon Crutchfield on that evening.

“He has apologized to the boys and told them that it is not against the rules to fly their flag on their truck. Apparently, it was a big misunderstanding that should have never gotten this far,” the mother said.

BTW21 News reached out to the Franklin County Public Schools Administration and, as of noon, has not received a call back.

This is still AMERICA.

If you don’t love and respect our flag you can leave.

I hear Honduras is very nice this time of year.