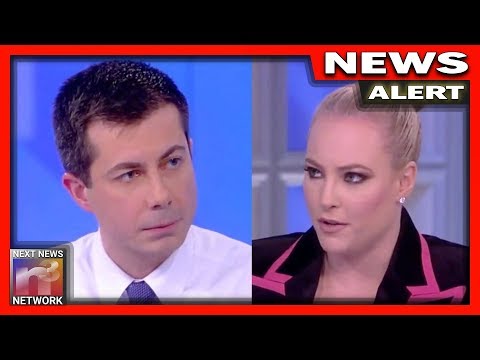 Pete Buttigieg is suddenly looking like a serious contender for the Democrat nomination.

It’s time to get to work exposing his evil, because there is plenty to expose.

On Thursday Buttigieg made an apprearance on The View and refused to say that he does not support infanticide/partial birth abortion.

Many who support abortion do not support infanticide.

There is a special place in hell for those who support the most cruel form of abortion imaginable.

Buttigieg spoke with The View’s Meghan McCain regarding his stance on abortions Thursday morning. McCain reminded Buttigieg that he once suggested that unborn babies can be aborted up until they draw their first breath, and offered Buttigieg a chance to walk back this statement, noting that Democratic Virginia Gov. Ralph Northam’s infanticide comments have accelerated the discussion of when a woman should be able to have an abortion.

“I just wanted you to clarify, because I found that statement to be pretty radical,” she told him.

But Buttigieg did not walk back his previous statement. (RELATED: Buttigieg Draws On Bible, Suggests Unborn Babies Can Be Aborted Up Until Their First Breath)

“I’m just pointing to the fact that different people will interpret their own moral lights, and for that matter, interpret scripture differently,” he said. “But we live in a country where it is extremely important that no one person has to be subjected to some other person’s interpretation of their own religion.”

The 2020 presidential candidate added that his point was that “it shouldn’t be up to a government official to draw the line. It should be up to the woman.”

“If a woman wanted to invoke infanticide after a baby was born, you’d be comfortable with that?” McCain asked him.

“Think about the situation. If this is a late-term situation, then by definition it’s one where a woman was expecting to carry the pregnancy to term. Then she gets the most perhaps devastating news of her life. We’re talking about families that may have picked out a name, maybe assembling a crib and they learn something, excruciating, and are faced with this terrible choice,” the former South Bend, Indiana, mayor said.

“I don’t know what to tell them morally about what they should do,” he continued. “I just know that I trust her and her decision medically or morally isn’t going to be any better because the government is commanding her to do it.”

The Buttigieg campaign did not respond to a request for comment from the Daily Caller News Foundation.

The pro-life organization Susan B. Anthony List responded to Buttigieg’s comments in a Thursday statement.

“On the heels of his town hall comments denying pro-life Democrats a voice within the party, Buttigieg doubles down on support for partial-birth abortion – a barbaric practice in which an unborn child in late pregnancy is partially delivered and killed by stabbing the base of her skull with scissors.”

Dannenfelser added that there is only choice for voters who are “repelled by the Democrat’s extreme abortion” agenda: “Donald Trump, our pro-life president.”

I bet if that baby was gay he wouldn’t slaughter it.

Of course, anyone with more than two functioning brain cells knows that God doesn’t make junk.

I have a 3 year old child that doesn’t walk or talk yet due to major health problems.

He does laugh and smile and connect with his family and we share much joy.

NEVER did my wife and I think about abortion, even though we knew there was a good chance our son would be mentally disabled.

Ryker, my son, is now the closest thing I have to a best friend.

Buttigieg is a smooth talker and we need to start looking at what he is all about.

This guy would probably try to move The White House to San Francisco.

Imagine the stories that will come out if America elects another gay president.

We’ve had enough of that.