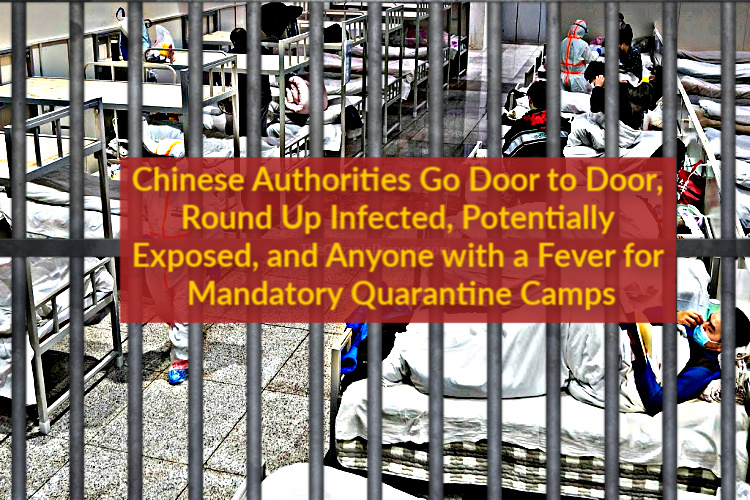 If you thought things in China had hit rock bottom with the quarantine of more than 400 million people, you’d be wrong. Shocking reports are emerging that are even more dystopian than the quarantine itself.

Multiple sources report that officials in China are now going door to door and checking for anyone who might be infected. If a member of the household is running a fever or displays any other possible symptom, they’re being taken away to be put into quarantine. Even worse, it appears that some contacts of people who have been confirmed to be infected are being quarantined too – you guessed it – with those who are already sick.

Again, I must emphasize that we don’t get this kind of news from official sources. People who put up these videos are risking their lives. In fact, quite a few of the citizen reporters who have been providing reliable reports have suddenly vanished over the past two days. While we can hope they just lost possession of their devices or access to the internet, or perhaps voluntarily went into hiding, the truth is likely to be far more dire. This secrecy and anonymity, however, does open the door for fraudulent reports, so while I do believe that these reports and videos I’m citing are likely to be true, I have no way to confirm this for sure.

The person leading the response to the virus is Vice Premier Sun Chunlan. Sun has said that China, and particularly Wuhan, face “wartime conditions.” And it what has to be the most authoritarian imagery ever, she warned citizens to cooperate, saying, “There must be no deserters, or they will be nailed to the pillar of historical shame forever.”

Sun has organized a near-military response, ordering medical personnel to work around the clock visiting each home in Wuhan, a city of 11.08 million people. When there, they are to check the temperature of each person in the house and question anyone who may have been in contact with a person who has been infected.

Ms. Sun said that anyone requiring treatment should be rounded up, if necessary, and forced into quarantine.

“It must be cut off from the source,” she said of the virus, addressing city officials at the shelter, according to a Chinese news outlet, Modern Express. “You must keep a close eye. Don’t miss it.” (source)

The death rate from the coronavirus in Wuhan is 4.1%, while the death rate in the rest of China is 0.17%, according to the NYT article. This disparity has led many to wonder chillingly whether Wuhan is being sacrificed on the altar of “the greater good.”

With the sick being herded into makeshift quarantine camps, with minimal medical care, a growing sense of abandonment and fear has taken hold in Wuhan, fueling the sense that the city and surrounding province of Hubei are being sacrificed for the greater good of China. (source)

And others are being trapped in their homes. I wrote in this article that many residents were finding themselves literally welded into their homes. The video below shows a police car keeping the door of an apartment building closed. (Waiting for the welders, I guess?)

Harbin, Heilongjiang, China. The police car is blocking an apartment building exit due to #coronavirus outbreak. Chinese authorities are getting more “creative” with everything but the kitchen sink quarantine approach. pic.twitter.com/lQg16iwGgW

In Heilongjiang, there is a complete ban on private cars. Here’s a video of the arrest of a woman who was caught driving.

LEAKED VIDEO: #Heilongjiang issued a ban on private cars on the road. An unnoticed woman was stopped by police after driving on the road.#nCov #coronavirus #CoronavirusOutbreak pic.twitter.com/iT13mX1uJW

In Wuhan, the center of the outbreak, hastily organized quarantine camps are housing the sick with what is said to be minimal medical care. The camps are being housed in public buildings like arenas and convention centers. Those being taken to these mandatory camps are people with confirmed cases of coronavirus, suspected cases of coronavirus because they’re showing symptoms, people who have close contact with those confirmed or suspected to have coronavirus, and those who are running a fever when the medical Stasi come and take their temperatures.

And this could make matters worse.

Moreover, experts fear that penning potentially infected people in large quarantine camps—set up in a sports stadium, an exhibition center, and a building complex—with minimal medical care could make the sick sicker and let the whole gamut of infectious diseases run rampant among the confined people. (source)

Imagine the effect of being taken to one of these camps on anyone who is taken into custody who actually doesn’t have the coronavirus. If they don’t have it already, it seems it would only be a matter of time before they, too, become infected, adding to the sacrificial air of the response.

The people in the video below are only suspected to have been in contact with an infected person, yet they’re being taken to be quarantined with the sick.

Chinese government are only suspecting these people have been exposed & therefore are going to quarantine them w/ people who have #coronavirus.

They are fighting because they don’t want to be quarantined w/ the infected. pic.twitter.com/6Lvnr2Cj7o

Are people spreading the word being punished with quarantine?

As I mentioned above, several citizen journalists who have been apparently reliable sources of information have completely vanished over the past couple of days. But that isn’t the only crackdown.  This video alleges that authorities are checking cell phones to see if citizens are posting information about what is happening in China. (Although one must wonder how someone else was able to take cellphone footage of this and retain his or her phone.)

Hainan Province, China – police are checking cell phones and arresting people for posting the truth about #coronavirus outbreak due to censorship. pic.twitter.com/tlRiStjQzY

Some speculate that whistleblowers may be deliberately exposed to the virus by being put into quarantine with the infected as punishment.

What aren’t they telling us?

China has repeatedly turned down offers of assistance from the World Health Organization and has not allowed Taiwan to accept help from the WHO either.

Alex Azar, Secretary of the Department of Health and Human Services forced the issue in a press conference.

On January 6, we offered to send a CDC team to China that could assist with these public health efforts.

I reiterated that offer when I spoke to China’s Minister of Health on Monday, and it was reiterated again via the World Health Organization today.

We are urging China: More cooperation and transparency are the most important steps you can take toward a more effective response.

Beyond that, all options for dealing with infectious disease spread have to be on the table, including travel restrictions.

But diseases are not terribly good at respecting borders, so we would have to assess carefully whether the evidence recommends any steps beyond the thoroughly tested methods I just described. (source)

With this third very public offer of assistance, the Chinese government finally allowed a handful of American scientists into the country.

The government there has unleashed a wave of unsurpassed censorship with brutal punishment for those who flout it. This should tell anyone that as awful as the reports are, the reality is far worse.

I cannot fathom anyone watching these reports of mandatory quarantines, door to door checks, and authoritarian crackdowns who wouldn’t want to get prepared for the possibility of an extended lockdown here in the United States. Yet every time I read a report on this, I see some person in the comments section saying, “bUT ThE FLU hAs KiLLeD 8000 pEoPLe ThiS yEaR!”

And honestly, I believe that is the most ignorant response imaginable. I don’t care if you’re a doctor, an essential oil seller, or a member of Mensa. If this was comparable to influenza, would China be cutting its own economic throat during the busiest time of the year? Closing down the country at Chinese New Year would be the equivalent to the United States closing down the country for the entire month of December while banning Christmas, Hanukah, and New Year’s Eve. We’re talking billions of dollars in lost revenue in China right now. Billions.

Whatever the hell is going on over there, it is definitely much worse than the “flu.” And we don’t even know the half of it.