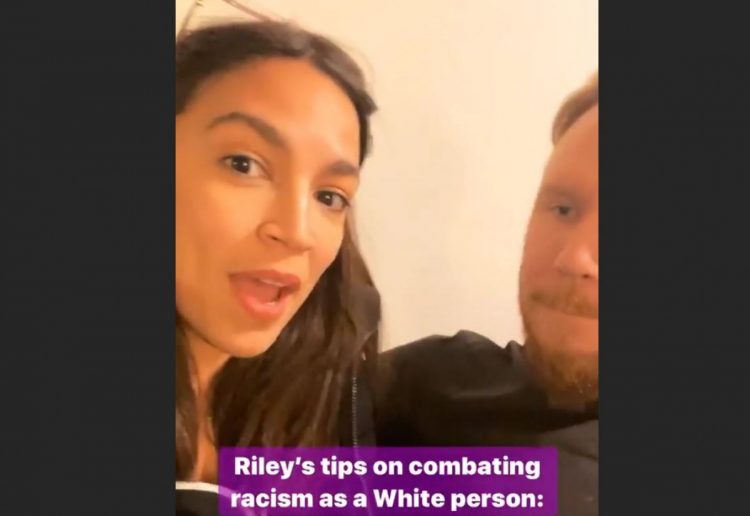 “…I think a lot of people, they don’t want to be racist,” Roberts said, Ocasio-Cortez at his side with her puppeteer’s hand up his backside. “They don’t think that they’re racist, but they also don’t know some of the things they believe or say are and can be racist.” Roberts went on to suggest that people tell “racist white friends” that they were not, in fact, racist, but merely held “wrong opinions.”

Lost in all of this is the fact that Ocasio-Cortez and her boyfriend – as well as the rest of her Justice Democrat, hyper-left, social engineering comrades – have their own definition for racism. As is always the case with the Progressive Left (and AOC and her ilk are the extreme in this already extreme group), they provide their own definitions to words; their own meaning to phrases and events, in an effort to rewrite history and advance their version of how the world should be.

This is their narrative; their definition of racism. They are judging an entire race by the color of their skin and ignoring the “content of their character.”

Thirty-five years before Ocasio-Cortez was conceived, the country went through a self-examination in the Civil Rights Movement. The nation, as a whole and as individuals, spent 14 tumultuous years scrutinizing racism in our society. During that time, Caucasians, as well as people of color, literally put their lives on the line to combat the evils of racism, especially in the Democrat South where the violent and murderous Ku Klux Klan held great power.

A great many Caucasian activists, who fully understood the evils of true racism, took action against those who existed as true racists, i.e. pieces of human excrement who would judge someone by the color of their skin, discriminate against them to maintain a superiority class system, limit their abilities to thrive, and many times take their lives because of it. Some Caucasian activists saw physical harm come to them for their beliefs, and some gave their lives in pursuit of the expungement of racism from our society.

Growing up in the 1960s I saw the thick of the Civil Rights Movement. Having attended Catholic school during this time, the philosophy of Dr. Martin Luther King, Jr. was not foreign to me; it was taught, preached, and expected to be part of who we were. My generation embraced the idea that you do not judge someone by the color of their skin (if you judge them at all), you judged them based on the content of their character and their actions. My parents and the community in which I grew up instilled these principles in my sister and me, as my friends’ parents did to them.

We have been living that philosophy not because some social engineering ideologue brow-beat the idea into our heads, but because it is the intelligent and kind thing to do. Being colorblind – and that includes the many colors of the Caucasian race – is the only intelligent thing to do. Only when one wears the glasses of colorblindness can someone’s true character be seen.

Ocasio-Cortez and her sycophantic, skinny jeans-wearing boyfriend arrogantly ignore that entire generations fought back the poison of real racism – life-threatening racism – and, in the overwhelming majority, reject racism in their lives. Instead, they are exploiting a very serious issue by equating politically correct, emotionally-charged victimhood “triggers” to racism. It is sickening and we, as a society should not tolerate their opportunistic manipulation.

LISTEN TO THE PODCAST

Frank Salvato is a partner at TRR Consulting Group, LLC, a reputation management and organizational strategies group. He serves as managing editor of The New Media Journal. His writing has been recognized by the US House International Relations Committee and the Japan Center for Conflict Prevention. His analysis has been published by The American Enterprise Institute, The Washington Times, and Accuracy in Media, and is syndicated nationally. Mr. Salvato has appeared on The O’Reilly Factor on FOX News Channel and is the author of six books examining internal and external threats facing our country. He can be heard twice weekly on “The Captain’s America: Third Watch” radio program syndicated nationally on the Salem Broadcasting Network and is a host on The Underground Podcast Network.
Share
Tweet
Share
Pin