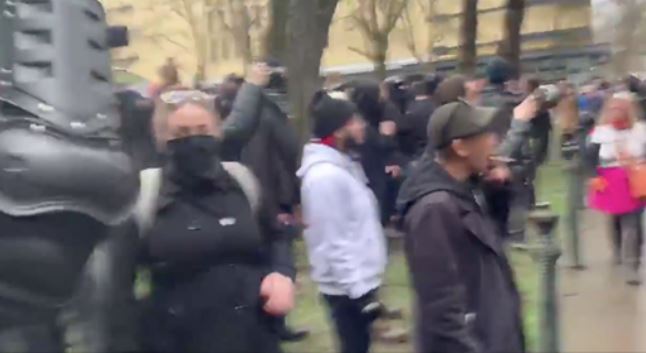 Opinion| Mark Sidney| If you are reading this, odds are that you are well aware of the danger to our nation, the rule of law, and the physical health of anyone who is not a radical totalitarian communist that Antifa poses.

The ‘Antifa’, or ‘Anti Fascist’ movement is one of the most ironic occurrences in the modern age. Fascism, according to Bing, involves ‘(in general use) extreme authoritarian, oppressive, or intolerant views or practices.’

‘Intolerant views’ … So, let me get this straight, the crazed mob, wearing all black from head to toe, faces covered with masks, weapons in hand, who physically assaults anyone who has political, social or religious views with which Antifa disagrees … are ‘anti-fascists.’

That is as absurd as saying that HRC is a patriotic stateswoman who values human life, or that Jeffery Epstein was a woman’s rights activist. Everyone and anyone paying attention to Antifa must see the absurdity of this movement of violent, spastic betas, hiding behind masks and engaging in gang violence, usually against a victim who is all by themsleves.

From my research, this is just one of the people working for Bernie’s campaign that Veritas caught making extremely troubling statements. From where I sit, this guy is not the exception, he seems to be the rule. Just look at what happened in Portland this week.

The Gateway Pundit is reporting:

‘Awakening from their winter hibernation, the Antifa terrorists who run the streets of Portland have resumed their well-reputed antics. Evidently a literal KKK rally was to take place in the city today, which the organizers had canceled by morning. This didn’t stop the throngs of masked Antifa, who showed up anyway to cause chaos.

“Law enforcement” officers from the Portland police bureau and Multnomah county Sheriff’s department can be seen retreating after Antifa pelts them with eggs and other debris.’

(Note: Shane Burley is a crazed leftist “journalist” who makes every excuse for Antifa’s violent behavior while sensationalizing the actions of others)

Knowing they have full control over the police and can get away with anything they want, Antifa responds to the “police” orders by throwing more debris at them.

“There are individuals in the crowd committing crimes.” Says @PortlandPolice over loudspeaker. Crowd is laughing.

Police and antifacist are staring at each across the street pic.twitter.com/ChaFq0VkgV

.@PortlandPolice tell the antifa mob to stop throwing projectiles at them. Antifa respond by doing more of it. pic.twitter.com/POj4CNLK6x

Woman being pushed about at Portland protest pic.twitter.com/ds6Bp2u0ID

A scuffle breaks out pic.twitter.com/HXIr6g1tXD

The black bloc and a videographer confront each other, pepper spray is in the air pic.twitter.com/nSPojZTUSd

Man with orange was taken for treatment by bike police off camera. pic.twitter.com/Gt55RDrG9E

A videographer (also named Andy) was attacked today by a group of masked antifa militants in downtown Portland. They threw projectiles at his head: pic.twitter.com/TOo3B48T0A

Seconds later, this man was just arrested after chase by bike cops to 4th and Taylor https://t.co/3FQ9QgK1Qz pic.twitter.com/2SBFkHnZDv

With the “police” neutralized, Antifa was then free to attack anyone, as they shove a small female into oncoming traffic and chase out another guy who looks like one of them.’

Antifa is a domestic terrorist outfit. Period. Full stop. If I were the Trump Administration I would be carefully studying these groups, infiltrating them, and beginning to create a database of the leaders of these violent mobs. As Bernie’s campaign worker mentioned, these people plan on carrying out political violence, which is the very definition of terrorism.

*Some edits have been made