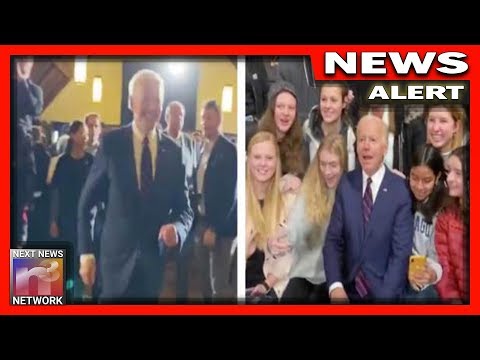 I have five daughters and I would not let any of them get within 50 feet of Joe Biden.

But it’s not a joke America.

Even his college roommate admitted Biden is attracted to kids.

He can’t help himself, apparently, and New Hampshire is the site of the latest Creepy Joe sighting:

What a sick man.

Biden is stumping in New Hampshire after taking a punch to the gut in Iowa.

Joe Biden looked defeated this week after he came in last place in the Iowa caucuses.

New Hampshire isn’t looking good for him either.

But the former VP looked really excited at the site of a bevy of young girls and made a mad dash to sit in the middle of the group!

Creepy hands Biden ran over to young girls at an event in the greater Manchester area on Thursday.

Joe’s entrance to the venue was even creepier.

What the hell is wrong with this pervert?

Ask yourself a serious question.

If you were a Biden strategist would you not tell him to cut the crap with the kids?

I can almost guarantee he has been told that, but he keeps doing it.

The man can not help himself.

Keep in mind that Biden, a former Vice President, finished 4th in Iowa behind an openly gay man, a communist and a pathological liar.

Because he’s pretty much all of them rolled into one.

Maybe he’s a hard socialist, but he’s working on earning his demerit badge in communism.

He might be a bigger pervert than Mayor Pete, and that’s not an easy task.

Joe Biden would be the first volunteer for that sick program, especially if he could mentor the young lesbians.