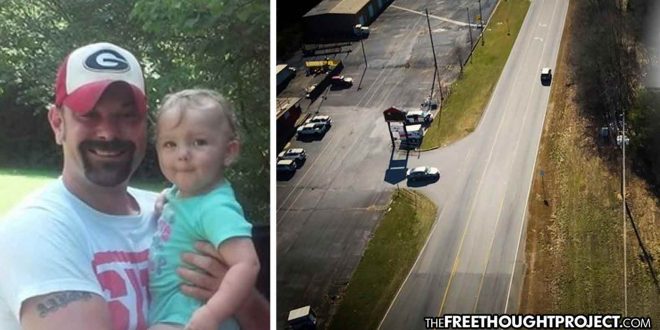 Cedartown, GA — The ‘good ole boy’ network is alive and well in Georgia and an innocent man is now dead because of it. Instead of calling for medical aid to help a dying cyclist their friend had just run over, a police chief and his state representative friend plotted how to cover it up.

Eric Keais, 38, spent his last hour on this Earth bleeding out in a ditch, suffering from internal injuries he sustained after being plowed down on his bicycle by Ralph “Ryan” Dover III.

“It’s really hard on me because he’s…my brother, man,” Eric’s brother Aaron Keais said through tears. “I wasn’t ready for him to go.”

11 Alive reports that Eric and Aaron were set to start working together as painters that week, but that would never happen. Now, Aaron is finding out the truth of what happened that fateful night on September 12, 2019—truth, that even surprised and enraged the coroner.

As 11 Alive reports, Polk County Coroner Tony Brazier wasn’t ready for what he would learn about the crash. That his friends, some of the most prominent people in the community, were involved in the aftermath to varying degrees.

“We realized early on that this was going to be a problematic case,” he said. “This was more than just a regular accident. The vehicle had been moved.”

Instead of stopping and checking on the cyclist he just hit that night, Dover drove nearly another mile with “the passenger side head light, hood and fender area caved in along with the passenger side windshield shattered and caved in,” the police report read. There was also red paint from Eric’s bicycle on the car too.

When he finally stopped, instead of calling 911 to report the dying man on the side of the road, Dover called his friend, attorney and Georgia State Representative Trey Kelley.

Dover later told police, “at first, he didn’t know what he hit and then said it could have been a deer or possibly a person,” the police report said.

“The best-case scenario, let’s say, ‘OK, [Dover] told [Representative Kelley] I hit a dog or a deer. Are you going to drive a mile away and call a lawyer? No,” Brazier said, emphatically.

Only a few minutes had passed since Dover struck Keais and paramedics could’ve been there in under five minutes to save his life. However, despite the fact that Representative Kelly “saw a bicycle at the side of the road” where the accident happened, instead of dialing 911, he called the chief of police, Jamie Newsome, at home.

While Eric was lying in the ditch dying, “[Representative Kelley] observed a bicycle on the side of the road and immediately called [Cedartown Police] Chief [Jamie] Newsome” at home, the police report said.

Newsome, according to the report, then acknowledged that a person may have been hit while on the phone with Kelley. Yet again, no one called 911. As 11 Alive reports, instead of calling 911:

He got on his police radio and asked his sergeant to call him on the phone – at home.

The Reveal discovered it would not have been unusual for the chief to call the 911 center directly for police, fire and ambulance to head to the scene. He had done so dozens of times in the past for a variety of things – including cases involving damage to property, location checks, etc., according to Polk County 911.

The sergeant says the police chief told him there was a possible accident and that he should go talk to the state representative and the driver who were now closer, in a parking lot across the street from the scene.

An hour after the crash, EMS was finally called who responded in less than 3 minutes. Eric’s body was found 100 feet from his bicycle. Showing how his life could’ve been saved had EMS been called earlier, Eric was still breathing when they found him.

“But by this point in time, we missed the golden hour,” Brazier said, explaining that, if a trauma patient can get into a trauma setting within an hour, their chances of survival changes dramatically. It improves.

Sadly, however, because Eric was left to die in the ditch for an hour, he succumbed to his injuries and died minutes later.

Below is a timeline of events put together by 11 Alive.

“If Polk 911 had gotten this call like it should have gotten…this boy might still be alive today,” Brazier said. “This mess here stinks to the high heavens. This reeks of the good ole boy.”

“My brother was cheated out of life…It’s just something out of a nightmare that you wouldn’t believe that would happen. That nobody would do nothing,” said Aaron.

The were not just nobodies, however, they are the very people who claim to ‘protect’ and ‘serve’ society. Instead of protecting and serving, however, they chose to cover their asses and an innocent man died as a result.

Highlighting the disgusting nature of this good ole boy network is the fact that Dover has faced no charges. The lack of charges comes in spite of the fact that on his death certificate, Brazier wrote that Eric died by “homicide” in a “hit and run” crash.

Dover never got so much as a ticket for the hit and run, fleeing the scene, or killing a man.

Brazier has since pledged to fight this until someone pays.

“I’m not going to allow this to go on, on my watch. I don’t care and I want to make it very clear, I’ll send whoever behind bars before I see this covered up,” Brazier said. Adding, “I used to have a great deal of respect and admiration for all three of these individuals. And, I, yes, considered them [Rep. Kelley and Police Chief Newsome] friends, but no more. I cannot and I will not tolerate this type of behavior.