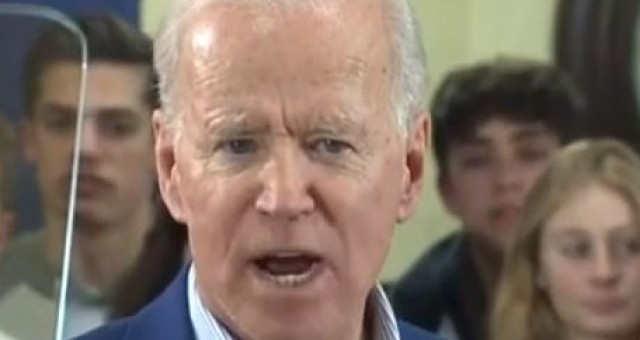 Hey Joe Biden! You just tanked in the Iowa caucuses and your approval in New Hampshire is in free fall, with a couple of polls out this weekend showing you in fifth place. What are you going to do to right the ship? Oh, you’re going to talk about the Second Amendment? Yeah, that should work.

Yeah, that should go over well in the Live Free or Die state.

The former vice president took a page from Eric “Duke Nukem” Swalwell’s campaign by threatening to use military force against American gun owners who would resist his gun control agenda at a campaign stop in New Hampshire over the weekend. It’s unclear from Biden’s rant what exactly would trigger him to call out a Hellfire missile strike on gun owners who object to his gun control plans, but it’s an idiotic argument to begin with, Cam Edwards at Bearing Arms reports.

Biden: "Those who say 'the tree of liberty is watered with the blood of patriots' — a great line, well, guess what: The fact is, if you’re going to take on the government you need an F-15 with Hellfire Missiles. There is no way an AK-47 is going to take care of you." pic.twitter.com/npmW40DHS2

Those who say ‘the tree of liberty is watered with the blood of patriots’ — a great line, well, guess what: The fact is, if you’re going to take on the government you need an F-15 with Hellfire Missiles. There is no way an AK-47 is going to take care of you.”

Biden’s total embrace of authoritarian rhetoric began with him bemoaning the fact that children today are taught active shooter drills in school, claiming it is “because we’re unwilling to have a rational policy that says you cannot have 20, 30, 40, 50 clips in a weapon.”

There is no such thing as a weapon that takes 20, 30, 40, or 50 “clips.” An AR-15-style rifle takes a single magazine, which normally holds up to 30 rounds of ammunition. Though some may object to such clarifications as “gunsplaining,” it is not too much to ask that those who would take away or limit others’ Second Amendment rights at least understand the basics of firearms.

There are 100,000,000 American gun owners and 400,000,000 privately owned arms in this country. Biden’s not going to be able to strike us all down with Hellfire missiles, no matter how much he might want to. It’s a silly talking point, and one that dances right around the fact that we’re already seeing resistance to gun laws in places like New York, New Jersey, and California, where compliance rates for new bans on firearms and magazines are in the single digits. That’s the reality that Biden and other anti-gun politicians have to deal with, and threatening airstrikes isn’t a realistic strategy. In fact, it’s a call to tyranny.