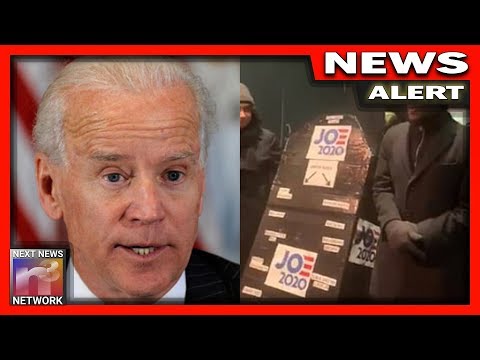 Do you think maybe even Democrat voters are finally on to Joe Biden?

He was greeted this week in New York with some nasty chants that culminated in a fake funeral, complete with Biden campaign stickers covering the casket.

I think New York, and most of America, has finally figured out that Joe Biden doesn’t belong in The White House.

Things are not going well for Joe Biden.

Last week, he came in fifth in the New Hampshire Democrat primary.

This week in New York, he was protested by people on the far left who want him to drop out of the race.

As if his poor results in Iowa and New Hampshire weren’t enough, Joe Biden was met with chants of “Drop out, Joe!” on Thursday night as he left a campaign fundraiser in New York City, according to reports.

Other protesters from the group New York Communities for Change held a mock “funeral” for Biden’s candidacy, featuring a black coffin decorated with Biden 2020 stickers.

Earlier this week, the 77-year-old former vice president’s struggles to connect with voters, despite being deemed the Democratic Party’s frontrunner for its 2020 presidential nomination, prompted him to leave New Hampshire early, before the primary results were in, so he could focus on the Feb. 22 Nevada caucuses and Feb. 29 South Carolina primary.

Biden told supporters in South Carolina on Tuesday that he wasn’t anywhere close to giving up on the race.

The eulogy was as classless yet hilarious as Joe Biden himself.

How can anyone take Joe Biden seriously at this point?

Joe Biden was never a good vice president, despite what he says & thinks.

Lately, with all of the Biden Family corruption coming to the surface, the only place want to see Joe Biden is behind bars. (note: I mean jail, not the AOC bartending academy)

Please note that we didn’t even bring Hunter Biden into this.

They are all crooked.

So it’s fitting that New York gave Biden a respectful eulogy and some words of wisdom to send him on his way.

Drop out Joe, you are embarrassing yourself.