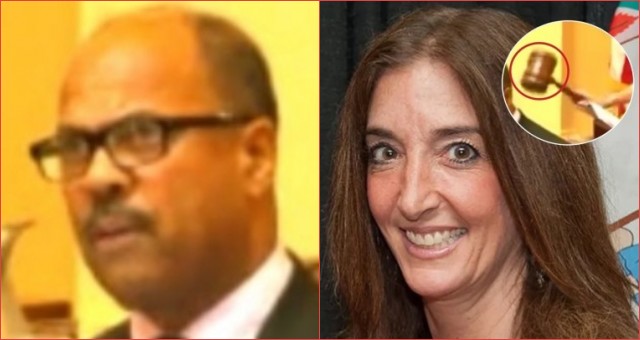 It’s no surprise to you if you live in Virginia, and perhaps even if you live anywhere else in the United States, that the state has been recently overtaken by leftists in both the House and the Senate.

This is in addition to the state having a Democrat Governor, Lieutenant Governor, and Attorney-general. It’s also no secret that with Democrat control comes a left-wing legislature that will take a state in a progressive direction. Most people who expect basic human decency, however, would still likely be taken off guard by the radical behavior of the new far-left speaker of the house in Richmond, Eileen Filler-Corn (D).

This occurrence from last Tuesday involved Speaker Filler-Corn gaveling an African American minister in the middle of a session introductory prayer because she did not like the content of said prayer. You can actually see this happening, not only in a video shown later in this article but in the cover image as well.

The disrespectful message here seems to be clear. Virginia leftists are in charge, and they are not playing nice. See an image of radical Filler-Corn below:

Rev. Dr. Robert M. Grant Jr. was the pastor who opened up with a prayer, and it was a long one. The length was likely not the reason for the early shut-down, instead the content of the prayer appears to have had something to do with it, and one might question if the Democrat House Speaker is a woman of faith at all, as most Christians understand that silencing a person mid-prayer is extremely disrespectful and irreverent.

Filler-Corn started off the session seemingly respectful enough, “the members will rise, and be led in prayer, by reverend Rev. Dr. Robert M. Grant Jr., Sr. Pastor, the Father’s Way Church, Warrenton.” She begins. She wrapped up her short introduction and then the Reverend took over. “It is a time to speak up”, he asserted in part, before kicking off the passionate prayer. “I pray that both sides, will put down their own selfish ambitions, and need for importance, and do their job and stand for what is right in the sight of God. We ask the Holy Spirit to give this House the courage to speak up and do what is necessary for right living and promote a peaceable, prosperous and safe state.”

The prayer went on for a while, with Grant Jr. asking God that people not usurp the constitution’s authority and unite for the common good. Later in the prayer, he gets more profound, praying that “we do not provoke God’s anger by making laws that can destroy the fabric of this great state and our wonderful country.” After mentioning that God is love, but he is also just, he continues, “please do not provoke his anger and bring wrath upon this state by what you create as law. Biblical history is very clear. His wrath upon the earth is documented. We are not exempt.”

Reverend Grant Jr. went on to pray that the people surrounding him would understand that life is precious, and he states the value of the unborn and how they have rights. He proceeds to rebuke those who would harm innocent children, homing in on the unborn. While some left-leaning legislators may think this is only a partisan prayer at this point in his long session with God, he also prayed for African American criminals getting sentenced longer than others in his opinion. This would lend credence to an idea that he isn’t just a partisan but rather someone speaking truly from his personal experiences, his heart, and what he believes.

After that he continued, “why are there so many abortion clinics near African American communities? This is planned urban genocide, and you can change this, this needs immediate attention.” After some words about prison reform, he prays that “this chamber will uphold the Virginia family, that the bills and laws being passed will always protect the biblical traditional marriage, as God instructed the first man and the first woman in the Bible, that the two shall be one flesh, that a man and a woman shall be fruitful and multiply. We should never rewrite what God has declared. If a state wants to use God’s law, then it needs to be respected. It’s not yours to change, or also it’s wording, the Bible is the copyright of God’s word. Marriage is to join a biological male and a biological female in holy matrimony, not to provoke the almighty God. Without laws to protect traditional marriage, Virginia will be reduced to increased fatherless children and welfare victims and homelessness, a tax burden to us all… “BANG”, the gavel went down at that point, before the reverend was allowed to finish, and the Pledge of Allegiance began.

See the entire prayer and exchange below in the video:

Towards the end, there appeared to be some grimaces from what were mostly likely Virginia Democrats. “Is this a prayer or a sermon?,” a delegate yelled from the Democratic side of the chamber as the prayer turned increasingly political. This is according to Virginia Mercury, who also reported:

Democrats walked off the floor of the House of Delegates Tuesday morning as the pastor invited to give the opening prayer delivered stinging remarks condemning abortion and gay marriage and said God would bring his “wrath” against those who don’t follow biblical principles.

Apparently even some Republicans felt the prayer was inappropriate, and it is up to how one interprets the Bible, as to what conclusions they draw, but most Christians would likely agree that prayer should not be interrupted with a gavel the way it was. Is it time for Republican Christians to continue to turn the other cheek, or push back? I suppose that depends on where one falls if they fit that category.

Democrats were sharply critical of the prayer’s tone, calling it a breach of the normal protocols for guest clergy.

“It was totally disrespectful to all of us, all of us in this House,” said Del. Luke Torian, D-Prince William, who is a pastor himself.

The pastor, the Rev. Dr. Robert M. Grant Jr. of The Father’s Way Church in Warrenton, had been invited by Del. Michael Webert, R-Fauquier.

Speaking to reporters afterward, Grant stood by his remarks and called the Democratic response “unprofessional.”

As he walked off, a man accompanying Grant asked a group of reporters if they were aware that “sodomy” was once considered an offense worthy of capital punishment. He declined to give his name.

Although Virginia has taken an abrupt turn towards the radical left, pushing gun control measures, attempting to negate undesirable electoral college vote outcomes in presidential elections, jacking up minimum wage, and pushing a whole slew of other bills supported by Virginia Governor Ralph Northam (D) and House Speaker Filler-Corn, this speaks to a broader shift in our nation as a whole. Although some supported the Reverend’s prayer, such as Del. Dave LaRock, (R-Loudoun), who reportedly posed for a photo with Grant Jr. afterward in the Capitol rotunda, it seems to be getting tougher out there for more traditional Christians.

Wherever one used to stand on things like pro-life or pro-choice, traditional marriage or otherwise, all opinions used to be welcome, even as recently as when former President George W. Bush and arguably former President Barack Obama were in office. More and more it seems that simply being tolerant isn’t enough anymore, and if you don’t speak or think the right way you could be shut down, called names, pushed back against, or perhaps, as was the case here, even gaveled into oblivion.

This article originally appeared at Media Right News and was republished with permission.