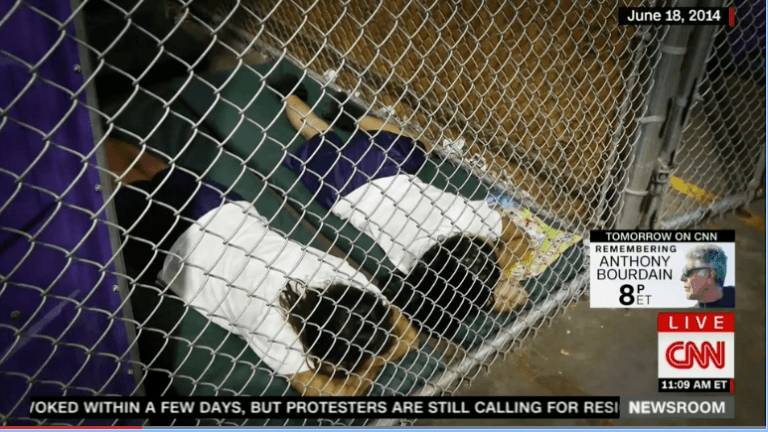 (TNS) One of Democrats’ favorite attack lines when it comes to opposing President Donald Trump’s immigration enforcement policies is to bring up the accusation that he “caged” immigrant children.

In reality, it is a policy that was begun under the Obama administration, in 2014, when the then-president was faced with a surge of illegal migrants of his own making at the U.S.-Mexico border.

On Friday, God bless him, Univision’s Jorge Ramos, who is always the activist before being a journalist, confronted 2020 Democratic presidential also-ran Joe Biden about the Obama administration’s policies of ‘caging’ immigrant kids, and it became an epic fail on his part.

“At the debate in Houston, you said that the Obama-Biden administration, and I quote, ‘We didn’t lock people in cages.’ But you actually did,” Ramos said. “Not at the same numbers as the Trump administration, but you did.”

The journalist pulled out a picture of an 8-year-old boy from Honduras and showed it to Biden. The former veep looked at the picture.

“Yes,” Biden replied, before realizing the admission he made. “Wait. Wait. Wait. This was–”

“This was in 2014 at a detention center in McAllen, Texas,” Ramos replied. “I spoke with the photographer.”

It was at this point Biden knew he’d been cornered so he turned on the spin.

“Yes, and what happened was all the unaccompanied children were coming across the border. We tried to get them out. We kept them safe and get them out of the detention centers that’s, essentially that center, that were run by Homeland Security, and get them into communities as quickly as we can,” he replied.

Ramos followed up by showing Biden the picture again. “Many people would say these are cages,” he replied (because they were).

“You know you’re not telling the truth here about the comparison of the two things,” Biden snapped.

Ramos clarified his position, saying the numbers between the Trump and Obama administrations vary.

Yes, much the same situation that President Trump was facing throughout last year when the Democrat-aligned mainstream media — and Joe Biden — were lambasting him for his ‘cruelty’ and ‘racism.’

But, as Townhall noted, the Biden spin (re: lies) didn’t stop there:

“But they kept coming,” Ramos replied.

“I remember that. They kept coming,” Ramos said again.

“Well, no, they didn’t. They dropped off extensively,” a wide-eyed Biden said. “Extensively.”

“And there was another wave of Central Americans coming,” the journalist reminded him.

Biden said the caravan came back because the Trump administration “stopped spending the money.”

The former vice president seems to have forgotten that a Senate report found that “an unknown number of Central American migrant children [were placed} into the custody of human traffickers after neglecting to run the most basic checks on these so-called ‘caregivers’” during the Obama administration, the Intelligencer reported.

Here’s another difference. When Trump tried to claim — accurately — that the U.S. was facing a “crisis” at the border, he was rebuffed repeatedly by the same Democrats and the same media who noted that Obama’s situation was — accurately — a “crisis.”

In a nationally televised address from the White House, the president warned about an “actual humanitarian crisis on the border” prompted by a surge of migrants from Central America, and urged Congress to take action on his immigration agenda.

The year was 2014, and the president was Barack Obama.

Tuesday night, President Trump addressed the nation on what he also called a “growing humanitarian and security crisis” at the border. Nearly five years ago, Obama gave his remarks in the Rose Garden, rather than the Oval Office, and the government was not partially shut down over border security.

Still, the situations at the border and in the White House — then and now — are strikingly similar, and immigration experts say the Trump administration can learn from Obama’s tenure.

And oh, by the way, that guy behind Obama is…Vice President Joe Biden.