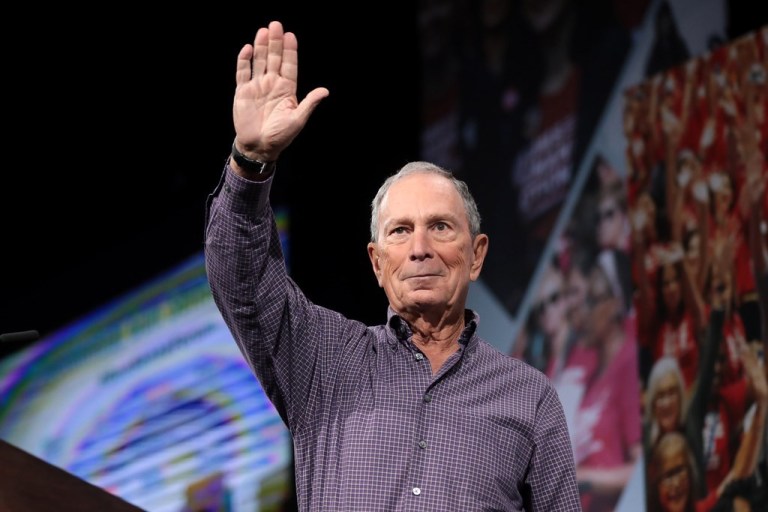 (TNS) Billionaire media mogul Mike Bloomberg has been in politics long enough to know it’s a cutthroat business, and that’s especially true since he was once mayor of the nation’s largest city.

Running for president is a whole other ballgame, however, as he’s beginning to discover.

Earlier this month, Bloomberg was forced to address his passionate defense of “stop-and-frisk” in 2015, which certainly carried racist overtones. Now, he’s got another verbal gaffe ‘scandal’ to deal with.

As POLITICO reported Sunday, Bloomberg — once a Republican — compared two core Democratic constituencies, teachers unions and a local American Civil Liberties Union faction — to the National Rifle Association, the latter an organization he has made it is mission to destroy.

“We don’t need extremists on the left or the right running our police department, whether it’s the NRA or the NYCLU,” the then-mayor Bloomberg said of the New York Civil Liberties Union, in a 2013 speech in which he defended the city’s controversial stop-and-frisk policy.

POLITICO said it had obtained a copy of the video in which Bloomberg made his remarks, adding:

At the time, Bloomberg had locked horns with the NYCLU over stop-and-frisk. The group vehemently opposed the policing tactic and was pushing legislation to make it easier for those targeted by it to sue the city.

In the same video, Bloomberg laid out a defense of the policy, denying it was racially biased.

“The legislation is based on the false allegation that the NYPD disproportionately stops young men of color, but as you know, stops are made based on descriptions of suspects and suspicious activity only,” Bloomberg said at the time. “And the sad reality is on the streets of our city, 90 percent of murder suspects and murder victims are black and Latino. And black and Hispanics are the overwhelming majority of suspects in other violent crimes.”

The resurfaced video comes as the billionaire businessman is reeling from an incendiary 2015 recording in which he described “stop and frisk” in starkly racial terms. “The way you get guns out of minorities’ hands is to throw them up against the wall and frisk them,” Bloomberg said in the 2015 audio, which drew widespread media coverage last week and a renewed push by Bloomberg to apologize for his past embrace of stop-and-frisk.

Bloomberg’s 2015 description of the policy seems to contradict his remarks in the 2013 video. Speaking to NYPD brass, he rejected claims that stop and frisk is racially biased.

“And the numbers put the lie to the racist allegations. In fact, the percentage of stops of blacks is less than that of whites and Asians when adjusted for crime reports.”

In 2007 and 2013, Bloomberg also compared teachers unions with the NRA.

In reference to leadership of the United Federation of Teachers, Bloomberg said in 2013: “The NRA’s another place where the membership, if you do the polling, doesn’t agree with the leadership.”

Randi Weingarten, who is now-head of the national teachers union, rebuked Bloomberg at the time.

“This was disgusting and the mayor is wrong,” Weingarten said at the time. “He’s been a real leader, nationally, on gun control. And by comparing the NRA and the [teachers union], it cheapens his advocacy about gun control at a time when we need his advocacy to be sharp.”

Then again, comments that ought to derail a presidential contender who insulted two of the party’s core constituents no longer seem to matter to the Party of Abject Hypocrisy.

Because Bloomberg’s running for the Democratic presidential nomination now, however, Weingarten walked back her criticism of him on Saturday in an interview with POLITICO.

“In New York there’s a lot of fierce comments,” she said, adding the two had a “complicated relationship” back then. “I don’t think he believes that anymore and I would hope he didn’t believe it when he said it.”

That’s in line with an endorsement Bloomberg received last week from the black mayor of Houston, Sylvester Turner, who seems to have quickly forgiven the former NYC mayor’s racist stop-and-frisk comments.

Also, Congressional Black Caucus member Congresswoman Lucy McBath said in her statement of support for Bloomberg, “Nobody running for president has done more for the gun violence prevention movement than Mike.”

Sounds like the Democratic hypocrisy in Virginia involving Gov. Ralph “Blackface” Northam, doesn’t it? At one point Democrats — and especially black Democrats — called for his ouster, but after the Garbage Party won control of the state legislature, Northam’s past racism didn’t seem to matter anymore because…the agenda.

The agenda is always more important than principles to Democrats, something to recall the next time one of them tries to claim that Trump supporters are ‘cultists’ who ‘lack principles.’

Will Bloomberg survive this? Probably. After all, word is he has Hillary Clinton in his corner, too.