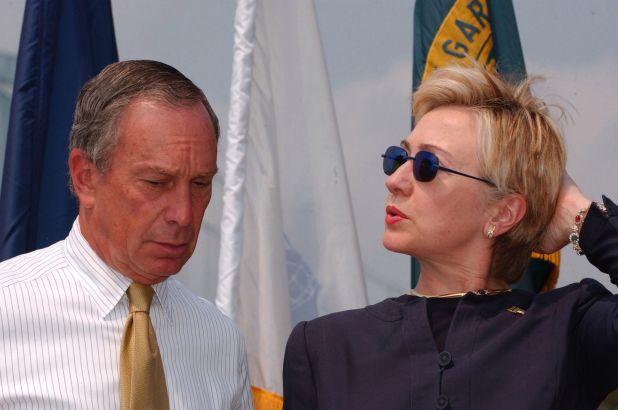 Michael Bloomberg is either incredibly stupid or he simply has brass cajones.

Has he not heard of what happens to those that get too close to Hillary Clinton?

Nonetheless, Bloomberg is desperate and allegedly considering asking HIllary to be his running mate.

From The Daily Mail…

Mike Bloomberg is considering making Hillary Clinton his running mate, a source close to his campaign has told Drudge Report.

Polling found the Bloomberg-Clinton combination would be a formidable force to take on Trump in the race for the White House, the source said.

Former New York City Mayor and Democratic candidate Bloomberg is said to be considering even changing his official residence from New York to Colorado or Florida – where he also has homes – because the electoral college makes it difficult for US president and vice-president to reside in the same state.

Under the Twelfth Amendment to the US Constitution, which provides the procedure for electing the president and vice-president, it states that the two people could not both inhabit the same state as the elector.

Bloomberg’s campaign would not confirm or deny the reports when DailyMail.com reached out for comments.

‘We are focused on the primary and the debate, not VP speculation,’ Communications Director Jason Schechter said in a statement.

This sounds a bit outlandish actually.

The only way Hillary Clinton would accept such an offer is if she thought Bloomberg could become collateral damage on her way to The Oval Office.

Hillary is a bitter clinger and still thinks she was screwed in 2016.

Do you really think she would take a backseat to Michael Bloomberg and be his Vice Presidential running mate?

Maybe if there was something in it for her.

Hillary will protect her own interests and the interests of Bill.

Because she doesn’t want anymore of his embarrassing sexcapades to tarnish HER legacy.

What would running with, and probably losing with, Bloomberg do for HER legacy?

However, if she thought they could win and had a plan to get rid of Bloomberg — she might say yes.

I personally think Bloomberg is crazy if he is considering this.

Nothing good can possibly come from it, for Bloomberg or for America.

Even if he won, he’d be assassinated or impeached.

There is no way that egotistical woman would play 2nd fiddle to Michael Bloomberg.