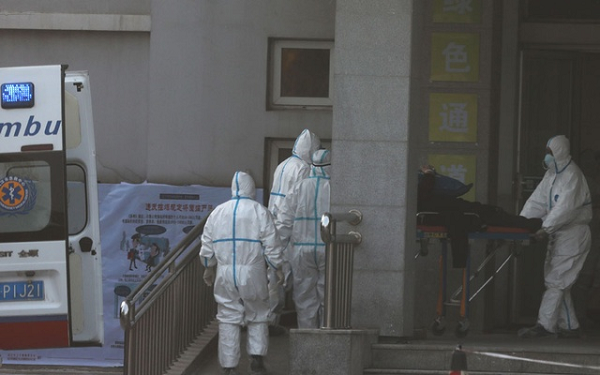 (Natural News) Chinese Communist leaders are desperate to keep the world (and their own people) from discovering just how bad the Wuhan coronavirus (COVID-19) epidemic is and they’ve been closed-mouthed about the number of actual deaths stemming from the outbreak.

However, little by little, news trickles out of the traditionally opaque Chinese government that allows analysts to get a much fuller picture of what’s really taking place in the country.

For example, in another indication that casualties are likely much higher than we’re being told, The Epoch Times reported Saturday that funeral home workers are flocking to Wuhan Province, the epicenter of the viral outbreak, to assist the city of 11 million in processing their increased number of dead.

The paper noted that Netizens were sharing job recruitment notices on social media in which high salaries were being offered to work at funeral homes in the province.

“This adds to the growing evidence that deaths due to the virus are piling up, at a scale greater than what authorities are officially reporting,” the Times reported, added:

As of Feb. 14, the Chinese central government announced that more than one thousand patients have died in Wuhan in the past 45 days. But staff at local crematoriums told The Epoch Times in recent interviews that their intake has skyrocketed in recent weeks, forcing them to work round the clock in order to process the bodies daily. One crematorium official said the facility recently peaked at processing 127 bodies in one day.

And clearly, with the job announcements, funeral home directors believe that ‘business’ isn’t going to slow down anytime soon —  a point emphasized by some local medical workers who have also been revealing the true severity of the pandemic.

“We have collected hundreds of thousands of samples for diagnosis,” Wang Hui, chief nurse at the Wuhan Tongji Hospital, one of more than 40 in the city that have been designated virus treatment centers, said during a recent media interview.

That means that the facility itself has treated hundreds of thousands of people suspected of having the virus.

A photo was widely shared on Twitter Feb. 12 showing 14 people dressed in the same uniform standing, masked, in front of the Shiqiaopu Funeral Home in Chongqing City.

The unfurled banner reads “Chongqing supports Hubei Province, funeral home service team,” according to The Epoch Times, which adds that Chongqing is just to the west of Hubei Province, the capital of which is Wuhan.

The same day on Weibo, a Twitter-like Chinese social media platform, an independent reporter posted that an eight-person team from the Chongqing branch of Fushouyuan International Group, China’s largest funeral service provider, went to Wuhan to provide support — another indication that ‘business is booming.’

Three workers from the Luoyang Funeral Home in Henan Province arrived in Wuhan Feb. 7, according to state-run newspaper Gongyi Shibao, but that report was eventually pulled, likely by Chinese government censors.

The same day, Hunan provincial-government-run media Xiaoxiang Morning reported that four funeral home employees were sent from Changde City to Wuhan to support funeral homes that were inundated with bodies of those who had died from the virus.

“Netizens shared a recruitment notice from the Wuchang Funeral Home posted onto a chat group on WeChat, a social media and messaging app. The Wuchang facility is one of the three main funeral homes in downtown Wuhan,” the Times reported.

The Feb. 12 recruitment notice said the funeral home needed 20 workers to pick up bodies between midnight and 4 a.m. Requirements for potential candidates were that they be between “16 to 50 years old…being physically strong and brave.”