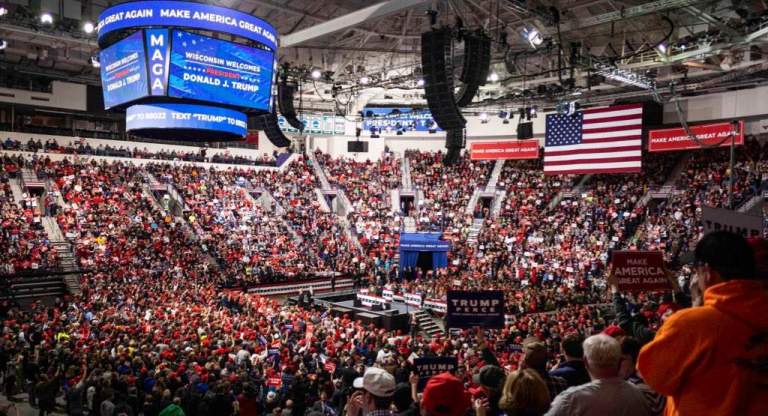 (TNS) Before Donald John Trump decided to run for president in 2015, one of the ways the political gurus measured the potential success of candidates was by the amount of voter ‘enthusiasm’ they could create.

And one of the ways they measured enthusiasm was by gauging the size of crowds at candidates’ political rallies.

That popular gauge went by the wayside during the 2016 campaign after it became obvious that wherever Trump went, throngs of supporters were going to show up.

Suddenly, the political gurus and media pundits told all of us that crowd sizes didn’t matter, that they weren’t really very ‘reliable’ in terms of measuring support for a candidate.

Uh-huh. Then came Trump’s electoral thumping of the most criminally investigated presidential nominee ever.

Fast-forward to the current presidential election cycle: If anything, President Trump is generating even more enthusiasm, crowd sizes, and rally attendance than he did in 2016, when those rallies were mob scenes.

And that doesn’t bode well for any Democratic contender, regardless of who eventually floats to the top of the Garbage Party ticket.

As POLITICO reports Sunday, Trump has so fired up his base of supporters — which includes many new supporters — that they’re casting ballots in Republican primaries in huge numbers, and he’s not even being seriously challenged by anyone:

President Donald Trump doesn’t have much of a primary fight on his hands — but Republican voters are nevertheless turning out in droves for him, a warning sign for Democrats in November.

The massive turnout is a reflection of organic enthusiasm among conservatives and a sophisticated effort by Trump’s campaign to rev up its get-out-the-vote machine ahead of the general election. Trump and Vice President Mike Pence traveled to Iowa and New Hampshire ahead of voting, and the campaign flooded the two states with high-profile surrogates and launched a Facebook advertising blitz reminding supporters to cast ballots.

The efforts are paying off, with Republicans turning out in historic numbers. Trump received more than 31,000 votes in the Iowa caucus, surpassing the 25,000 Democrats who turned out during Barack Obama’s successful 2012 reelection bid. Trump’s share was more than four times the number of Republicans who caucused during George W. Bush’s 2004 reelection campaign.

The vote totals in New Hampshire were even starker. The president received 129,696 votes, more than doubling Obama and Bush’s totals.

While it’s unclear what the figures might portend for the general election — the president’s job approval numbers remain stuck in the mid-40s in most surveys — the results highlight the degree to which Trump’s base is energized. A little more than a year after the president’s party suffered sweeping losses in the midterm elections, Republicans are bent on ensuring that Trump wins a second term.

“There is a personal vote for Donald Trump that is unshakeable,” John Couvillon, a Louisiana-based pollster who has been tracking the primary totals, told POLITICO. “Republican voters are willing to go out” to vote for Trump even though he doesn’t have a formidable primary challenge.

Democrats are partly to ‘blame’ for the massive GOP turnouts.

“Impeachment has lit a fire under the Trump base — and I anticipate it will burn until Election Day in November,” former Minnesota Sen. Norm Coleman, chairman of the pro-Trump Republican Jewish Coalition, told the news site. “Voter intensity is a key element in electoral success.”

There is additional ancillary evidence that the president’s supporters are massively enthusiastic about vindicating his first term and giving him a second one.

Lifelong Democrat Karlyn Borysenko recently attended a Trump rally, only to discover his supporters are nothing at all like the Leftist media — CNN, Washington Post, NY Times, USA Today, etc. — have portrayed them (or the president).

Writing at Medium, she said she believes a huge red, pro-Trump tidal wave will engulf Democrats on Election Day:

I think the Democrats have an ass-kicking coming to them in November, and I think most of them will be utterly shocked when it happens, because they’re existing in an echo chamber that is not reflective of the broader reality.

Nothing in politics is a given, of course, but through a combination of things — non-stop Democrat and establishment media hatred of the president coupled with his kept promises and policy achievements — the Left appears to have greatly overplayed their hand.