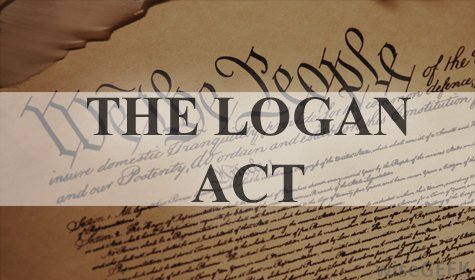 There was a day when Treason was not taken so lightly in America.

Now it seems to be a normal part of the political game, at least for Democrats.

Ever heard of The Logan Act?

This section shall not abridge the right of a citizen to apply, himself or his agent, to any foreign government or the agents thereof for redress of any injury which he may have sustained from such government or any of its agents or subjects.

One of them was John Kerry, who no longer has the right to represent America in any way.

John Kerry was the last in the line of Democrats that was accused of violating the Logan Act but he didn’t face any criminal investigation.

The Dems argued that there wasn’t enough evidence.

But now another case surface where we can see a clear example of violating the Logan Act.

Via The Federalist:
Sen. Chris Murphy of Connecticut and other Democratic senators had a secret meeting with Iranian Foreign Minister Mohammad Jahad Zarif during the Munich Security Conference last week, according to a source briefed by the French delegation to the conference. Murphy’s office did not respond to repeated requests for comment by press time.

Such a meeting would mean Murphy had done the type of secret coordination with foreign leaders to potentially undermine the U.S. government that he accused Trump officials of doing as they prepared for Trump’s administration. In February 2017, Murphy demanded investigations of National Security Advisor Mike Flynn because he had a phone call with his counterpart-to-be in Russia.

“Any effort to undermine our nation’s foreign policy – even during a transition period – may be illegal and must be taken seriously,” Murphy said in 2017 after anonymous leaks of Flynn’s phone call with Russian ambassador Sergey Kisylak were published. He also strongly criticized the open letter some Republican senators sent Iranian leaders during the Obama administration’s campaign for a nuclear agreement.

According to a press release from Republican Lindsey Graham, other Democrats at the meeting included Sens. Robert Menendez of New Jersey, Kirsten Gillibrand of New York, Sheldon Whitehouse of Rhode Island and Chris Coons of Delaware.

Former Secretary Of State John Kerry was also at the meeting.

In truth, John Kerry likely organized the meeting. He’s done this before.

The Logan Act is just another one of those laws that has been conveniently memory holed.

How is it that President Trump can be brought to task for killing a terrorist but these Senators can’t be touched for negotiating with our enemy?

Many Democrat Senators accused President Trump of overstepping his bounds by killing a known terrorist.

Privately negotiating with the enemy seems to be a much deeper concern.