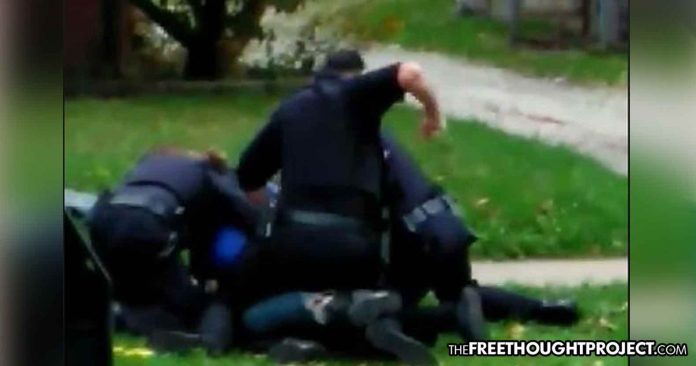 Akron, OH — A video of several officers arresting an Ohio man went viral as it shows police officers on top of 47-year-old Patrick King, tasering him and punching him over and over—more than 30 times. According to King the stop should have never happened as he was simply walking back from the neighborhood store and stopped to talk to a friend. Now, after the department failed to hold the officers accountable for their alleged crimes, the taxpayers will be held liable instead.

As TFTP reported at the time, the incident unfolded in October of 2018 and the video is nothing short of disturbing. King was simply minding his own business when two cops jumped out of their car, asked for some information and started savagely beating him when he questioned them.

“Basically pulled up alongside of me, jumped out and asked me for my ID,” King said.

“They wanted to handcuff me and I didn’t want to be handcuffed and I said, ‘What for? What for?’ And, they got one handcuff on me and then threw me to the ground,” he said. “They started beating on me, wailing on me, kicked me in the ribs several times.”

King said he’s injured from the attack and has a hard time moving around.

“I can barely sit still right now. I’m having trouble just raising my spine,” he said at the time.

As the video shows, officers begin struggling with King who is simply getting kidnapped for no other reason than wanting to be left alone. Other than giving cops a fake name, presumably because he didn’t want them to know who he was, King had harmed no one.

Police only stopped him because they claim he was seen leaving a “known drug house.”

When the local news company asked King if he thought it was excessive force, he minced no words, saying, “Yes, I do. I’m just waiting to get a hold of a lawyer and I plan on suing.”

Now he is. On Friday, King’s attorney, Eddie Sipplen, filed a federal lawsuit claiming the arrest violated King’s fourth amendment right against unlawful searches and seizures, according to FOX 8.

“At the end of the day, Patrick did nothing wrong. He’s allowed to walk in his neighborhood without being detained or stopped by the police who have no rational basis to even entertain it. They didn’t suspect him of committing a crime, having a weapon or any of that. No articulable, reasonable suspicion that would lead to probable cause,” said Sipplen.

FOX 8 reports the lawsuit also names Officer Ryan McPherson, who video shows arriving at the scene later and then proceeding to deliver more than 30 blows to King’s trunk as he was still on the ground.

“King did not present a threat to the safety of any of the defendant officers or to any other persons,” the lawsuit claims, calling the officers’ response excessive and unreasonable.

According to Akron police, however, they say the video doesn’t tell the whole story and King presented a danger to the officers.

At the time, Deputy Chief Jesse Leeser said King was “spotted leaving a known drug house and lied about who he was. An officer got one handcuff on the 6-foot-4-inch, 220-pound man, but he ignored multiple commands and resisted for several minutes.”

Leeser said the dozens of punches, taser strikes, kicks and knees were all necessary to subdue King. However, as TFTP has reported, it is nearly impossible to listen to officers’ commands to “stop resisting” and lay perfectly still as they taser, punch, and kick you.

“He was obviously actively fighting with these officers. They were winded. The fight had gone to the ground. Not only did he have the handcuff as a weapon possibly, but the officers were also very exposed. We’re not ground fighters,” Leeser said.

At least one of the officers appeared to be a ground fighter though. McPherson is seen delivering countless punches to King in a UFC-style ‘ground and pound.’

As for King, he denied leaving the drug house and said he never attacked officers during the arrest.

And the lack of charges from the incident prove this. Despite facing multiple charges after the incident, King faced only one count of resisting and pleaded no contest to avoid a trial.

According to News 5 Cleveland, King said he served six years in the Army. During his service, he was involved in an Army vehicle accident in Panama and was pinned in the back seat. He said the incident left him with post-traumatic stress syndrome.

He said that feeling of being pinned rushed back to him when he was on the ground with police, which put him a panic mode.

“The Tasers came out. Everything was happening so fast. As far as me flailing and wailing around, yeah, that was a combination of the electricity going through my body and the PTSD.”

“I hope you never get in that situation, but it seems like it’s become more and more of a police state,” King told WEWS.

Biden BANS Travel From 8 AFRICAN Countries Due To ‘Variant Of Concern’ — Is That Racist?
Clash Daily