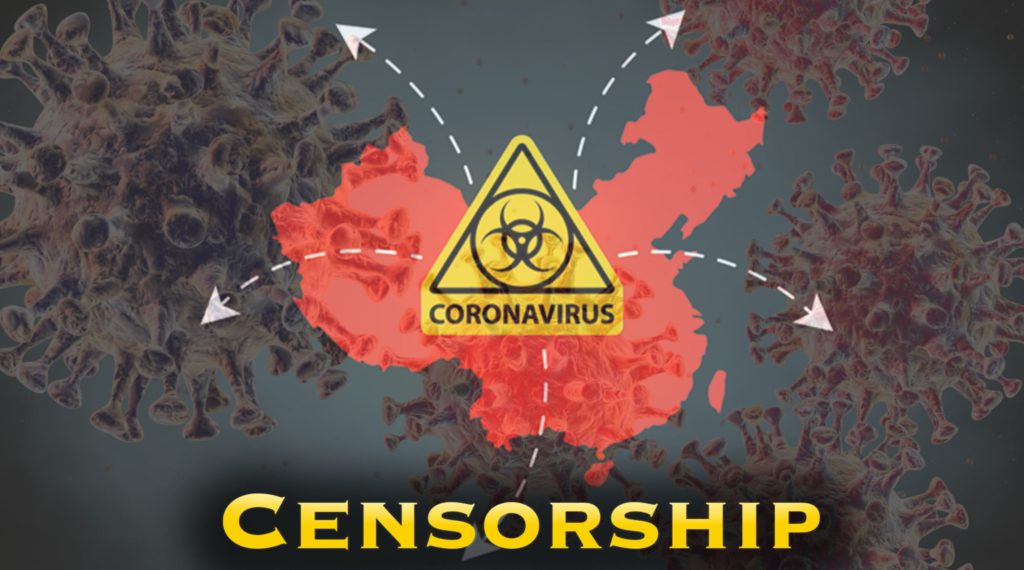 China’s President Xi Jinping has called for tightened control over online discussion and increased policing to ensure “positive energy” and social stability according to state media, Bloomberg reported. This is being pushed as Chinese scientists in South Beijing have said the virus’ origin was the long-suspected Wuhan Virology lab or another Wuhan Center for Disease Control lab.

The government must “strengthen the management and control of online media,” and “crack down on those who seize the opportunity to create rumors” on the internet, Xi said.

“It is necessary to increase use of police force and strengthen the visible use of police,” Xi said, calling for a crackdown on behavior that “disrupts social order” including hoarding medical supplies. This is amid a lockdown of over 400 million people forbidden from leaving the country and in some cases even their own homes. Xi’s call to police the internet comes after a Chinese professor, Xu Zhangrun, published a rare public critique of President Xi Jinping over China’s coronavirus crisis. The man was then placed under house arrest after his report according to the Guardian.

Other Chinese scientists in South Beijing just recently released a bombshell study from the Beijing-sponsored South China University of Technology that states the Wuhan Center for Disease Control (WHCDC) could have spawned the contagion in Hubei province.

“The possible origins of the previously named 2019-nCoV (COVID-19) coronavirus,” are claimed by Botao Xiao and Lei Xiao to originate from either the Wuhan Virology Institute or the WHCDC which kept disease-ridden animals in laboratories, including 605 bats.

The paper also mentions that bats – which are linked to coronavirus – once attacked a researcher and the “blood of a bat was on his skin,” which resulted in the researcher quarantining himself after the incident for 2 weeks.

The report adds that the “Genome sequences from patients were 96% or 89% identical to the Bat CoV ZC45 coronavirus originally found in Rhinolophus affinis (intermediate horseshoe bat).”

“The WHCDC was also adjacent to the Union Hospital where the first group of doctors were infected during this epidemic,” the report said.

“It is plausible that the virus leaked around and some of them contaminated the initial patients in this epidemic, though solid proofs are needed in future study,” the researchers wrote.

The scientists further state that besides the WHCDC, the report suggests that the Wuhan Institute of Virology could also have leaked the virus, as Activist Post previously reported early on. “This laboratory reported that the Chinese horseshoe bats were natural reservoirs for the severe acute respiratory syndrome coronavirus (SARS-CoV) which caused the 2002-3 pandemic,” the report said. To note the paper is talking about the WHCDC lab and not the Wuhan Institute Of Virology.

The Washington Times reported that Wuhan is the site of two Chinese biological labs according to Dany Shoham, a former Israeli military intelligence officer who has studied Chinese biowarfare. The report which was published prior to the Beijing scientists claims, suggests the virus was either accidentally let out or deliberately. If true, it would explain how the coronavius evolved so fast to jump from animals to humans.

When the Washington Times asked Shoham whether the new coronavirus may have leaked, Mr. Shoham said:

In principle, outward virus infiltration might take place either as leakage or as an indoor unnoticed infection of a person that normally went out of the concerned facility. This could have been the case with the Wuhan Institute of Virology, but so far there isn’t evidence or indication for such incident.

What’s more, the lab was officially working with different strains of coronavirus, as well as other deadly illnesses like Ebola, beginning in 2018. This lab is just 20 miles away from the Huanan wet market where the first case of the coronavirus is believed to be transmitted.

This is significant because there was a theft of coronavirus sent to the Wuhan Virology lab and the lab themselves posted a job offer which discussed – “using bats to research the molecular mechanism that allows Ebola and SARS-associated coronaviruses to lie dormant for a long time without causing diseases.”

An author at BuzzFeed got Zerohedge suspended on Twitter for mentioning the job post and linking to public details on the official responsible for the lab. Further, that same writer then proceeded to attack anyone who believes the virus is biological calling it a “hoax,” including Francis Boyle, the man who drafted the Biological Anti-Terrorism Act of 1989. This writer also noted that videos of people collapsing in China, and other videos were fake, without a shred of evidence.

Boyle did an interview with Geopolitics and Empire, as well as Activist Post‘s contributor Spiro Skouras. In the interviews, Boyle said the coronavirus outbreak in Wuhan likely came from the BSL-4 lab in the city.

Boyle stated in the interview that he believes the virus is potentially lethal and an offensive biological warfare weapon or dual-use biowarfare weapon genetically modified. Boyle also touched on a fact this reporter stated previously — how Chinese biowarfare agents working at the Canadian lab in Winnipeg were involved in the smuggling of coronavirus to Wuhan’s lab in July of last year.

A husband and wife Chinese spy team were recently removed from a Level 4 Infectious Disease facility in Canada for sending pathogens to the Wuhan facility. The husband specialized in coronavirus research. #coronaviruschina #CoronaOutbreak https://t.co/f2MpCZgkHX

Lancet medical journal recently published a study finding that many of the first cases of the novel coronavirus, including patient zero, had no connection to the wet market, leading many like Boyle to speculate with supporting evidence that the virus may have been a bio accident. The Lancet study corroborates the study published by South China University of Technology. Other DNA sleuths at the New England Journal of Medicine and the National Institutes of Health continue to investigate.

In 2015, National Med published a paper warning that a “SARS-like cluster of circulating bat coronavirus pose threat for human emergence.”

Before the lab opened, scientists all over the world were voicing concerns about the potential dangers. An article was even published in the science journal Nature in 2017, detailing the plans for the lab and sharing expert opinions about how a dangerous bug could leak from the facility. In fact, the SARS virus has escaped from high-level containment facilities in Beijing multiple times.

Interestingly enough, in 2004, China punished five top officials of the Chinese Centre for Disease Control and Prevention (CDC) for the outbreak of SARS. The investigation found that the release of the virus was due to the negligence of two CDC employees who were infected and was not deliberate, China Daily reported.

At the time of this report, the coronavirus has widely surpassed that of SARS with officially over 71,900 confirmed cases and a total of 1,775 dead, according to the Johns Hopkins map.

However, many express skepticism that China is telling the truth about those infected and dead, including the White House and scientists like Professor Neil Ferguson, as the Guardian reported.

China is also being accused of lying to the public about the figures of those infected by many sources like the Wall Street Journal, and even Chinese media which was censored for spreading that thought. China recently censored a media outlet called Caijing, which is one of the most reputable outlets in the country. In the article, the authors claim that China has significantly under reported both the cases and deaths, especially among the elderly. (archive) (translation)

There is also a report by the Wall Street Journal that Chinese doctors are saying coronavirus cases are pneumonia or another sickness to hide the official count. Yahoo News also reports that Wuhan officials are cremating deceased coronavirus victims before they can be added to the official death toll.

Meanwhile, purported leaks out of China like those from the Tencent app, a funeral home recording, and alleged Chinese doctors have suggested the numbers are much higher, as Activist Post has reported. Especially since German doctors have now determined the virus has the ability to stick on surfaces and objects for at least up to 9 days. China has also announced that the virus is airborne with a potential rare incubation rate of 24 days. However, some estimates are much higher with the Global Times reporting that one woman who was infected in Wuhan didn’t start showing symptoms until a massive 42 days later.

Best preventive measures include washing your hands, and avoiding public places where someone may be sick, according to the CDC.

Symptoms of the coronavirus include a fever, cough, shortness of breath, and breathing difficulties. However, according to Chinese state media, some are not experiencing any of these symptoms and are instead experiencing nausea, diarrhea, tiredness, bad concentration, headache, irregular heartbeat, chest pain, cornea inflammation, and muscular pains in the limbs, back, and waist. Best preventive measures include washing your hands, and avoiding public places where someone may be sick, according to the CDC.