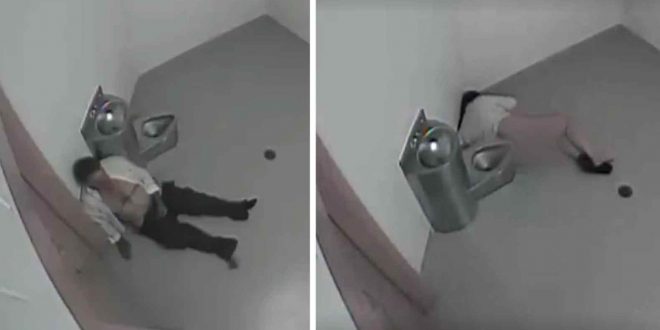 Alan Ruel was a successful businessman and loving husband of 36 years. However, his life would be forever changed after police mistook his stroke for being drunk. Instead of getting him help, they kidnapped him and threw him in a cage. According to a recent lawsuit, while inside the drunk tank, Ruel continued to undergo a massive stroke for 18 hours all the while being ignored by police. He never had a sip of alcohol.

Ruel’s false kidnapping and subsequent torturous neglect are now part of a lawsuit filed against the RCMP. This innocent man’s case is one that plays out in jails across the United States. Entirely innocent people have their medical emergencies or mental illness mistaken for drug use or criminal activity and they are subsequently kidnapped, beaten, and caged.

In Ruel’s case, his neglect and and encounter with police incompetence nearly cost him his life and certainly changed it forever—in a very bad way.

“It was probably one of the worst days of my life. I was absolutely terrified. I was scared. You’re alone. You’re cold. You don’t know why you’re there. There’s people that are supposed to help you … I actually thought I was going to die at one point, and the thing that scared me is that I was going to die alone,” Ruel, 73, told Go Public.

Ruel’s nightmare started on July 16, 2015, when he went to meet a friend at a local bar. According to the lawsuit, the stroke began just before he walked into the bar causing him to slur his speech and be confused. He never ordered a drink.

On July 16, 2015, Ruel suffered a small “disorienting event,” according to the lawsuit, likely an initial stroke, causing him to slur his speech and be confused.

In that state, he entered a bar to visit the owner, who was a friend. His clothing was disheveled, his pants undone and his vehicle was parked on the sidewalk.

According to police reports, a bar employee assumed he had arrived drunk — since Ruel had only had a glass of water at the bar — kicked Ruel out and called police. The arresting officer reported smelling alcohol on Ruel’s breath.

Ruel says he told officers he wasn’t drunk and asked for a breathalyzer test but was denied.

Instead of giving Ruel a breathalyzer to prove he was telling the truth and get him help for his stroke, police kidnapped him and threw him in a concrete room.

“I don’t blame the RCMP for picking him up. He probably did look like he was intoxicated,” said Ruel’s lawyer Mathew Farrell. “[But] if they had been paying attention and if they had breathalyzed him or had him examined before he went into that cell, or even if they had just been watching him when he was in there, they would have noticed that something wasn’t right, something wasn’t adding up.”

Sadly, they did not know or care to know. Instead, this innocent man was denied medical care that could have prevented his extreme suffering and permanent disability.

“[RCMP] kept with that assumption for the next 18 hours in spite of evidence that there is a person undergoing a medical crisis,” a mistake the RCMP has made before, said Curt Griffiths, an expert in policing who has been hired by Ruel’s lawyer as an expert in a $6-million civil case against the police force.

“When you lock them up and they seem to be getting worse instead of better, you need to be asking questions,” Farrell said.

But no questions were asked. As the disturbing video shows, the disoriented Ruel is walking around the cell in a completely confused state before he collapses to the floor from the stroke. Guards, who were supposed to check on him routinely, left him alone for hours, according to the lawsuit. Had they checked on him, it could’ve prevented his traumatic injuries.

“I begged for a glass of water at one point, and nothing. I just thought, ‘This is it, your life is over.’ Little did I know that it really is over to a certain extent. I’m still breathing, but what I know of my life before this is gone,” Ruel said.

As he is now permanently disabled, Ruel, who was a former offshore drilling consultant, says no one will hire him because he is too injured from the stroke. He and his wife are now worried how they are going to survive.

“I was a big-time skier. I can’t ski anymore. My hunting, my fishing, my motorcycle trips I used to do, I can’t do that no more … as far as I’m concerned, they stole four and a half years of my life.”

Below is this most disturbing video.