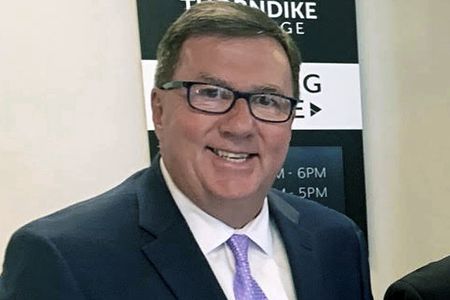 Another low-level Democrat has been arrested.

Have you ever noticed how the corruption and arrests are usually from the Left side of the aisle?

Prior to his arrest Tuesday morning, state Rep. David Nangle, D-Lowell, allegedly attempted to maintain a lifestyle that included gambling at six casinos in four different states, and keeping a membership at a golf club in Lowell.

But, despite a salary ranging from $60,000 and $60,250 from 2014 to 2018, plus additional income from serving in leadership positions – including a stint as chairman of the House’s Committee on Ethics – Nangle found himself “heavily in debt,” according to a federal indictment. Nangle allegedly used campaign funds to maintain his habits, among other alleged crimes.

Nangle, 59, of Lowell, who has served as the state representative for the 17th Middlesex District since 1999, was arrested Tuesday morning on 28 different counts – 10 counts of wire fraud, nine counts of making false statements to a bank, five counts of filing false tax returns, and four counts of bank fraud, according to the U.S. Attorney’s Office, District of Massachusetts.

“This was not a momentary lapse of judgement or a technical foul,” U.S. Attorney Andrew Lelling told reporters in a press conference. “This was a systematic pattern of theft and fraud going back to at least 2014. Nangle accomplished it in part by using people close to him.”

From November 2014 through April 2019, Nangle allegedly used campaign money for member dues and other expenses at the golf club in Lowell, and concealed them by labeling them as “catering” or other expenses related to campaigning when reporting expenditures to the state Office of Campaign and Political Finance, the indictment shows.

Nangle also allegedly used campaign expenses to rent a car for escapades to different casinos, according to the indictment. In one instance, he allegedly went to casinos in New Hampshire and Massachusetts in February 2016, but in reporting the use of campaign funds, labeled the expenses as “rental car for travel to State House.”

Campaign funds are meant for getting candidates elected, not to support one’s gambling habits.

Nangle isn’t the only Democrat who has tried this.

Nothing has resulted in the accusations toward Tlaib and nothing might ever come of it.

The Feds arrest these low level local and state legislators to make it appear like they are doing their jobs.

Not often do they put a big fish in cuffs.

As in the case of Ed Buck, they always tend to arrest the lower level people but not those that they serve.

Still, we have to celebrate the small victories.

David Nangle won’t be gambling away his supporters’ money again.

He will leave the gambling away of his supporters’ TAX money to salaried and protected criminals in Washington, while he gambles for smokes and watches Oprah in some posh pseudo-prison.