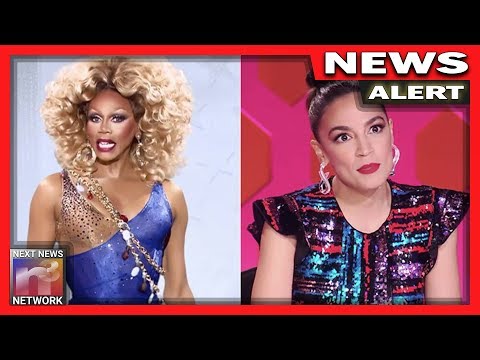 Not only is Ru Paul doing TV, but AOC has joined the cast of his? show.

She can’t sink much lower than this I’m afraid.

Every time I say that, AOC makes me eat my words, however.

Conservatives blasted Rep. Alexandria Ocasio-Cortez for appearing on the next season of “RuPaul’s Drag Race” as a guest judge, where she’s seen “pledging allegiance to the drag” in a trailer for the VH1 show.

In promoting Season 12, which premiers February 28 at 8/7 central, VH1 says, “Get ready for fierce looks, killer comedy, herstoric competition and plenty of shade…”

“I’m Alexandria Ocasio-Cortez, and I pledge allegiance to the drag” pic.twitter.com/foOgpoRTnp

Ocasio-Cortez said it was “100% a peak experience” and hit back at critics, telling them “they can go back to Party City,” which is a reference from an earlier season of the show when a contestant insulted a competitor for having cheap clothing.

This will go a long way toward settling that in my mind.

This Drag Queen movement is a huge problem in America and it is coming for YOUR kids.

This is not wholesome entertainment America.

It is part of the LGBTQ agenda that is overtaking our younger generation.

AOC is just the latest slimy Democrat to endorse it.

Hopefully, for her sake, she does well on Ru Paul’s show because that might be her full time job in 2021.