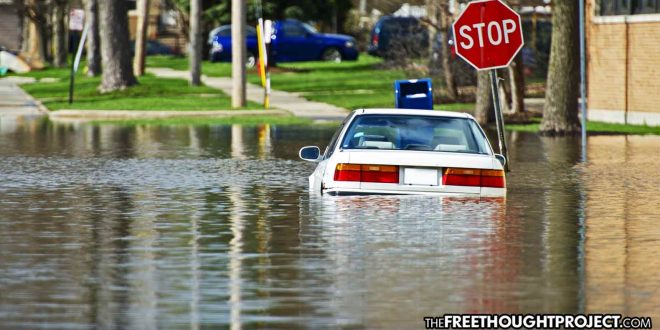 HOUSTON (CN) – A federal judge dismissed the claims of Houston residents seeking to hold the government liable for flooding their homes with Hurricane Harvey storm water released from two dams, finding there is no constitutional right to perfect flood control.

Harvey stalled over the Houston area for four days in August 2017, swamping neighborhoods and freeways and forcing people to evacuate in chest-deep water as first responders and good Samaritans rescued others in boats, and Coast Guard crews threw down rope ladders from helicopters for people who had climbed on their roofs to escape the rising water.

The largest storm in the recorded history of the United States, Harvey dumped an average of more than 33 inches of rain over the Houston area, with some parts of the city getting more than 50 inches.

The storm created a no-win situation for the Army Corps of Engineers as Harvey runoff pooled behind two earthen dams 20 miles west of downtown Houston and flooded dozens of upstream homes and businesses.

The Corps of Engineers decided to open the floodgates full bore, something the agency had never done since building the dams in the 1940s to control the flow of Buffalo Bayou, which increased the normal 2,000 cubic feet per second rate of release from the dams to 13,000.

The release flooded homes along the bayou that had never flooded before and thousands of downstream homeowners brought a class action against the government, claiming it had to compensate them for storing water on their property under the Fifth Amendment’s Taking Clause.

Upstream property owners also sued the government under the same takings theory, claiming it had not bought enough land for the reservoirs, which are usually dry and empty as the Corps only impounds water in them from sustained rains, to keep surrounding properties dry.

The upstream owners hit pay dirt in December as U.S. Court of Federal Claims Judge Charles Lettow, a George W. Bush appointee, determined the upstream flooding was the foreseeable result of the Corps of Engineers’ design of the dams and its operating plans for them.

The upstream litigation is now headed for a second trial to determine damages, with arguments set for April 28 at the National Courts Building in Washington, D.C.

Some compensation seemed likely for the downstream litigants as well as Judge Smith, a Ronald Reagan appointee, ordered attorneys for the government and property owners in a Dec. 11 hearing to hold settlement meetings in December and January.

“I think it’s an ideal case for settlement,” he said at the time. “One thing that makes a settlement easier is when it’s about money. This is about money.”

Those talks apparently bore no fruit as Smith ruled Tuesday that the government cannot be held liable for an act of God.

“This storm, which overwhelmed the system’s capacity was classified as a once in 2000-year event, which means the last such event occurred during the life of Jesus!” Smith wrote in a 19-page order.

Government attorneys argued the flooding was inevitable –homes upstream and downstream were flooding before the dam gates were opened, and without the dams it would have been worse.

Class member Dana Cutts said in an December interview she felt like she had dodged a bullet watching the water drain off her property near Buffalo Bayou in August 2017 and feeling the sun on her face after Harvey moved southeast after four days of pounding Houston.

But Cutts said she then watched the water go right back up again as the Corps of Engineers released it from the dams. Her home, which had not flooded since she bought it in 1976, took on 8 inches. “Enough to wreck the whole house,” she said.

She said given Houston’s history of tropical storms that routinely swell bayous beyond their banks, she would have avoided the area if not for the dams.

But Judge Smith sided with the government, writing, “These were flood waters that no entity could entirely control.”

He added, “Plaintiffs also claim that the mere presence of the water control structures means that the government owned all waters that passed through them. So, do plaintiffs have the right to be perfectly protected from flooding? The simple answer is no; the right to perfect flood control…is not recognized by either Texas property law or federal law.”

Class counsel H.C. Chang of the Houston firm McGehee, Chang, Landgraf, Feiler said, “We respectfully disagree with the judge’s ruling and conclusion.  We will review and research our options for appeal.”