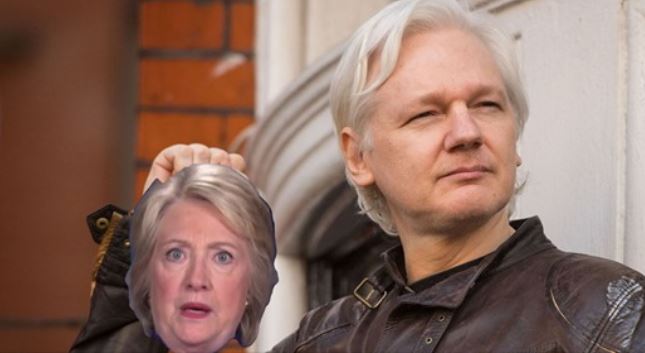 OPINION| Lawrence David| The announcement that Julian Assange’s formal extradition hearing is due to begin Monday has sent the Deep State protectors in the media into apoplectic overdrive.

Readers of this space know how crucial it is to the preservation of the corrupt construct within the intelligence community to maintain the silence of Julian Assange.

Assange’s Wikileaks was the source of the hacked DNC emails that the Deep State claimed was the foundation to begin the Russia hoax attacks and the surveillance of Donald Trump, first as a candidate and then as president.

Except that was never proven. There was a ‘murder’ but the weapon was reportedly never found… or more correctly, never examined by forensic experts. Why?

Why was the declaration by Crowdstrike, a DNC contractor, taken as gospel?

When President Trump asked for Ukrainian President Voldymyr Zelenskyy’s help getting the DNC server from Crowdstrike, he was impeached by corrupt politicians looking out for their own self-interest.  Why?

The Russia hoax has been completely debunked, except for one important point. An exclamation point… were the Russians even responsible for the hacked emails that Wikileaks made public?

When that answer is known, if it is ever known, and it is determined that Russia was not involved… Well, that’s when the entire lie of Trump-Russia collusion is exposed.

That’s when the plot orchestrated by corrupt Washington politicians, a corrupt intelligence community, and an equally corrupt media to subvert the Constitution and remove a duly elected president becomes known to a wide swath of Americans.

This is the danger this corrupt construct of politicians, spooks, and their narrative engineers, face if Assange is successfully extradited to the United States where he can testify.

Congressman Dana Rohrbacher, the only elected U.S. official to actually talk with Julian Assange, said this about what he learned from that face-to-face meeting:

Rohrbacher: “Once we know the Russians weren’t involved, then we have to understand that this massive propaganda campaign, this historic con-job that happened after the election to prevent our president from exercising the powers granted to him by the voters, this is one of the great political crimes committed against the American people in our history.”

Rohrbacher said he saw evidence that makes him 99% certain Assange’s consistent assertion that, “We can say, we have said, repeatedly that our source is not the Russian government and it is not a state party,” is absolutely true.

Since Rohrbacher made those claims more than two years ago, his words have been ignored or mischaracterized by the Deep State protective media. Yesterday he sought to set the record straight:

There is a lot of misinformation floating out there regarding my meeting with Julian Assange so let me provide some clarity on the matter: https://t.co/4ujr21e6YH #FreeAssange #SethRich #justice

There are multiple witnesses and cyber forensic experts, including John McAfee and William Binney, who have offered their testimony but they have been ignored. Why?

Seth Rich was murdered. His murder was never solved… wonder why?