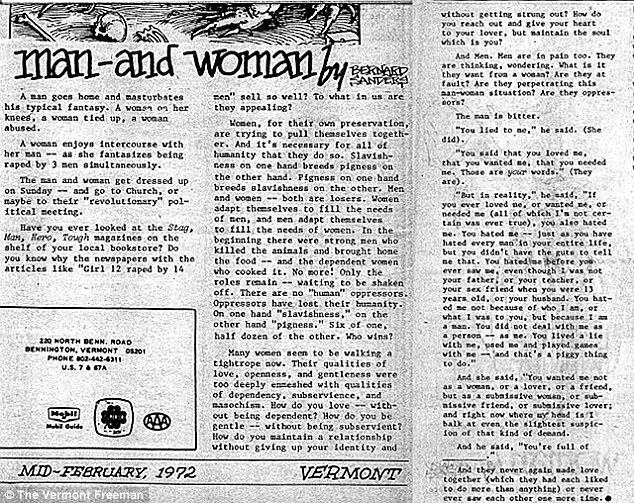 Of course, here are some of the little nuggets that young Bernie thought were so enlightening, courtesy of Deplorable Kel.

A man goes home and masturbates his typical fantasy. A woman on her knees, a woman tied up, a woman abused.

A woman enjoys intercourse with her man — as she fantasizes being raped by 3 men simultaneously.

The man and woman get dressed up on Sunday — and go to Church, or maybe to their ‘revolutionary’ political meeting.

Have you ever looked at the Stag, Man, Hero, Tough magazines on the shelf of your local bookstore? Do you know why the newspaper with the articles like ‘Girl 12 raped by 14 men’ sell so well? To what in us are they appealing?

Sanders brushed it off as nothing more than another version of 50 Shades of Grey, which to be honest, it just might be that, but the fact that he defends such writings as though they are wholesome and healthy is sickening, but we shouldn’t be surprised.

In the end, Sanders is running for the nomination of the party that supports all sorts of sexual perversions, and the murder of the unborn when people can’t save sex for marriage and the woman conceives.

They are also a party that supports rapists.

One in particular who was our former president, Bill Clinton.

The things that Bernie wrote are not merely thoughts in his head, they are thoughts of the commission of crimes that he merely passes off as mere entertainment.  One wonders if Sanders has ever beaten a woman or raped a woman when he expresses such thoughts.

So again, no one should be surprised the old Bernie is holding fast to his own fantasies while trying to push them off as though the people are guilty of having them.

It looks like a lot of people are going to feel the Bern in 2020, unless those who are the greater elitists get to him first.