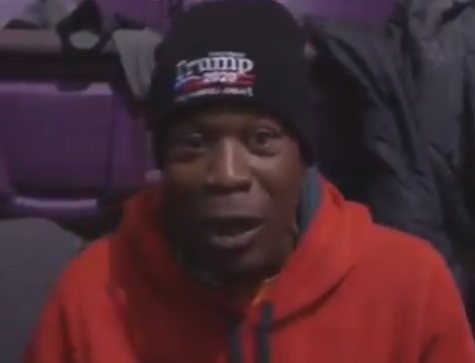 This man must really hate his family. 😉

When Obama was president he saw them all the time.

Now they all have jobs, he doesn’t see them and he’s grateful?

I think this is what Trump calls “too much winning.”

“Now that @realDonaldTrump is in office, I don’t see my family anymore because they have JOBS… which is a GOOD thing!”

“Thank you, Donald. I love you!” pic.twitter.com/8D0CkjoqET

The black Trump supporter continued, “And now that Donald Trump is in office, I don’t see my family no more, because they got a job and they’re too busy and I don’t see them anymore—which is a good thing, because now my 401K is going up and my Roth account is going up.” He ended the interview by thanking President Trump and telling him that he loves him.

Another minority Trump supporter was asked about why he supported President Trump. The former Democrat responded by saying he was supporting President Trump because before Trump was elected, he was on food stamps and Medicaid, and now he is working and has insurance, allowing him to get off both government assistant programs and become self-sufficient.

Former Democrat: @realDonaldTrump and his economy is the reason I’m off food stamps and Medicaid pic.twitter.com/huo6qJEuJ7

Has Trump really made America better for minorities?

Many black people are saying yes.

Isn’t CNN who Anna Navarro works for? That explains a lot.

The Black Community is wising up and they are finally seeing a chance to escape their would-be masters with REAL OPPORTUNITY instead of handouts.

Democrats have always been the party of the KKK, eugenics and limiting the advancement of their own voters.

If they don’t limit advancement, their voters succeed and don’t need Democrat handouts.

For decades their voters have fallen for empty promises.

But things are finally changing.

Trump has awoken the sleeping giant that were once the brainwashed masses.