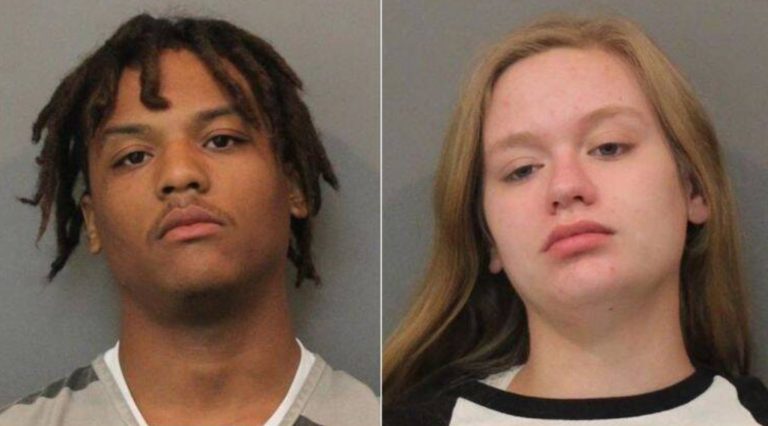 A mixed race couple driving in a car near Hobart, Indiana spotted two 14 year-old white boys riding their bikes, with Trump flags flying. In a rage, the black driver swerved into them, forcing them off the road. Getting out of his car he physically threatened them and destroyed one of the flags while his passenger verbally assaulted them.

According to a probable cause affidavit, the boys told officers that a vehicle with a man driving and woman passenger followed them before the male driver pulled up nearby and asked one of the boys “if they were Trump supporters” – to which the boy replied that they were.

The driver then swerved at the boys, forcing them onto roadside grass to avoid being struck, according to the affidavit. The driver followed the boys before exiting the car and tearing off the flag from one of the brother’s bikes, the affidavit states.

Just like all the other leftist cowards, the driver jumped back in his car and sped away before anyone else could stop and assist the boys.

Stupid is as stupid does—posting videos of crimes they commit

In a video posted to Snapchat, allegedly by the couple of their encounter with the boy, shows “the driver turns the wheel sharply as if he saw the boys and wanted to hit them with the vehicle while yelling `ya’ll better get home,'” according to the affidavit. A male’s voice is then heard telling the female passenger “pull that flag down” in the video which shows the female trying to reach it through her window and her saying, “get closer.”

The taunts tell a lot about these two–isn’t there a nice communist country we could send them to?

“The female is then heard saying `ya’ll scared, just like your president” and `America is not great'” followed by an expletive, according to the affidavit.

In a second Snapchat video, Perry-Jones allegedly says, “Don’t let me see you downtown” to one of the boys and threatens to beat him up.

Both Perry-Jones and Smith have been charged with two felony counts of intimidation and criminal recklessnes. They were also charged with one count each of theft and criminal mischief, both of which are misdemeanors.

Unfortunately some social justice bleeding-heart judge will probably give them a slap on the wrist instead of them doing some real hard-time for this assault.