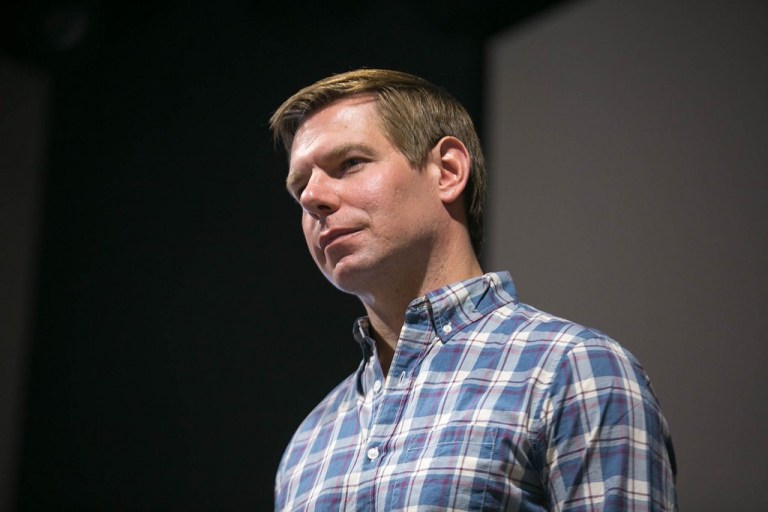 (TNS) Once again, California Democratic Rep. Eric Swalwell, the original “Russian collusion truther,” has proven that you can have an obvious mental health problem and still be elected to Congress.

On Friday, The New York Times dredged up the three-year-old hoax of “Trump-Russia collusion” in a story citing “intelligence officials” who said that Vlad Putin is going all-in for President Trump this year (again).

Former special counsel Robert Mueller did not make a lot of things clear in his report following his 18-month ‘investigation’ except this one thing: Mother Russia did not “collude” with the 2016 Trump campaign to ‘steal the election from Hillary Clinton.’

No evidence of that was found by his team of very partisan Hillary Clinton donors. Zip. Zero. Zilch. Nada. And why? Because the allegation was a fabrication to begin with. A myth. A hoax. A deep state lie designed to entangle President Trump in scandal and undermine his presidency, with the ultimate objective of driving him from office.

So why does the New York Times continue to regurgitate this lie? Well, of course, the answer is obvious: The paper has been in on the hoax from the outset and, with a lot of help from CNN, the Washington Post, and other “mainstream” media outlets has managed to convince a plurality of Americans that the lie is true.

Almost immediately, the Times story was attacked as inaccurate. As Red State reported:

Even CNN’s Jake Tapper called it out in his reporting, citing a national security official source who he knew and trusted. The classified briefing happened last Thursday and was conducted by Shelby Pierson, the Intelligence Community election threats executive under the acting Director of National Intelligence Joseph Maguire.

The source added that “it’s more that they understand the president is someone they can work with, he’s a dealmaker. But not that they prefer him over” his Democratic opponents. “So it may have been mischaracterized by Shelby.”

CBS’ Catherine Herridge is debunking the report as well with her source.

Source familiar w/house briefing @CBSNews says briefers pressed for evidence to back up claims Russia “trying to help POTUS in 2020.” Asked if there was signals intelligence – such as phone intercepts or “SIGINT” – to back up claims, source said briefers had none to offer #DNI

Subsequent reporting by the New York Post and others claimed that Russia was actually deferential to Sen. Bernie Sanders — which appears to make sense, given Sanders’ proclivity for socialism and his historical admiration for the Communist-run Soviet Union (where he honeymooned).

And while this all has the markings of an influence operation run by intelligence services, either in Moscow or Langley (or both), out trots the Russian collusion truther, Swalwell, to declare that Russian influence is okay for me but not thee.

During an appearance on CNN (of course), Swalwell was asked, “Do you have any question, any reason to question the reporting that you all were briefed on this as well?”

“Again, I won’t go into that as [the House Intelligence Committee] has, consistently for the past year, been looking at what Russia is trying to do in our elections, and we believe that the upcoming elections should be free from interference,” Swalwell began. “The voters voted for that in 2018 when they gave us the midterm election, that they wanted more oversight of the elections.”

“Just to put a finer point to what’s going on here with Bernie Sanders: You can’t hold it against Bernie Sanders that this may be a preference of Russia,” he said. “But you can hold it and ask questions about Donald Trump, if he again, is working as an agent of Russia, by seeking not only one: to tweet at Bernie Sanders and try to amplify his campaign to get him his general election opponent, but two: if he is, indeed, firing people on his staff who are telling others about Russia’s preferences, again, that’s Donald Trump trying to cover up things to help Russia.”

Well, again, President Trump was never an “agent” working on behalf of Russia, and shame on CNN’s host, Kate Bolduan, for failing to challenge this lunatic on that point.

Secondly, and Bolduan should have made this point too, we shouldn’t want Russia (or any country) interfering in our elections, period, on behalf of any candidate.

That Swalwell, the Democrat, believes there is a distinction without a difference here is telling.

Putting his party back in charge would obviously revive the bad, old days of the Obama regime, when the order of the day was weaponizing federal intelligence and law enforcement agencies against political opponents while sowing discord and distrust among the American people for personal gain, regardless of the harm it did to our country.