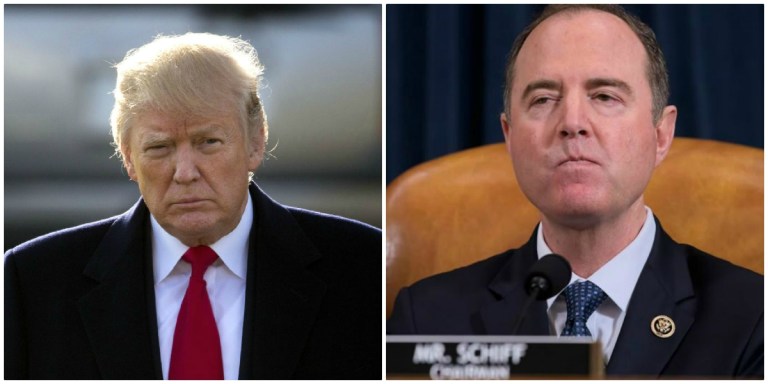 (TNS) There is no love lost between President Donald Trump and House Intelligence Committee chair Adam Schiff (D-Calif.), the latter of whom was empowered by Speaker Nancy Pelosi to turn his panel into “Impeachment Central” over the Ukrainegate nonsense.

And on Sunday, this clash of personalities — Trump has one and Schiff does not — went public again as the president blasted the “leaker” from La La Land in an interview Sunday, according to the Washington Examiner.

The president said that he hadn’t been briefed on the interference effort aimed at disrupting the Democratic presidential primary process but made it clear he believes Schiff had something to do with it.

The Examiner story went so far, as Left-wing “mainstream” media often do, to add the qualifier that Trump made his claim sans evidence. That’s annoying, to say the least, because they seldom if ever use the same qualifier when reporting allegations made against the president — ‘He’s a Russian asset,’ ‘he’s Putin’s stooge’ — by politicians like, oh, say, Adam Schiff and the original Trump-Russia truther Eric “Duke Nuke-em” Swalwell, Schiff’s California colleague.

But okay, let’s play along. What evidence would the president have to make the allegation in the first place? Never mind that his regular intelligence briefs and allies on Capitol Hill, colleagues and former colleagues of Schiff know of his ‘reputation for leaking‘ and have publicly called him out for it.

What’s more, virtually no one but Schiff’s co-chair, Rep. Devin Nunes (R-Calif.), seems to be focusing on the fact that whatever information was passed along to the Times was classified and, thus, it is illegal. And as we have reported, yes, even congresspeople can be charged with felonious leaking of classified information (and they should be).

True, past behavior (alleged) isn’t proof that Schiff did anything wrong this time around, but even federal prosecutors establish ‘fact patterns’ in prosecutions; why isn’t Trump given the same courtesy?

In any event, it’s no wonder he is currently purging his White House of known and suspected leakers. Between them and radical political enemies in Congress, our national security seems to be another casualty of Trump Derangement Syndrome.