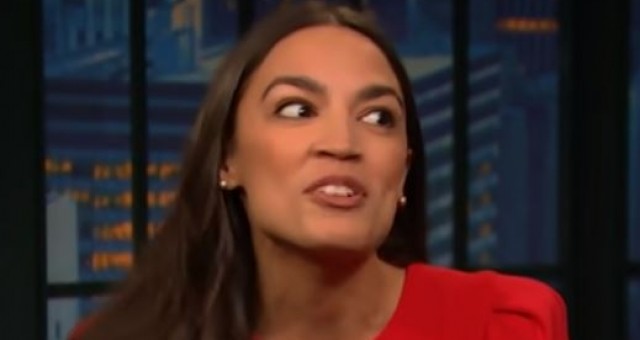 New York State Democrats may have found a way to get rid of Rep. Alexandria Ocasio-Cortez and they won’t need to primary her to do it.

As we have reported the state of New York could lose at least one congressional seat in 2020 after the Census and it could be Ocasio-Cortez’s seat on the chopping block.

“New York is expected to lose a House seat after the 2020 Census, and state Democrats are looking to draw out AOC’s district,” Frank Luntz, a noted pollster, said.

New York is expected to lose a House seat after the 2020 Census, and state Democrats are looking to draw out @AOC’s district.https://t.co/DYXvzqvWXm

Ocasio-Cortez has been working hard to get her constituents to fill out their census forms in order for her to keep her nice $170,000 a year job, The City reported.

“Our strategy is all about building trust in the community before the enumerators even come to your door,” the representative said.

“There’s been an increased use of one’s immigration status as a form of intimidation,” she said to The City.

The issue for her is that 47 percent of her district are foreign born and there is no telling what percentage are legal, thus there is a fear of taking an official government survey.

For Ocasio-Cortez, a full Census count is more than a matter of making sure her district gets all the funds and services it’s due. In a sense, her own political fortunes could hang in the balance.

A review by THE CITY, building on data and analysis by The Texas Tribune, suggests Ocasio-Cortez’ district could be particularly vulnerable to undercount because a little over a quarter of those living there are non-citizens.

That’s a higher percentage than any other congressional district in the state.

A Census undercount in Ocasio-Cortez’ district and elsewhere in the state could lead to the elimination of congressional districts — potentially setting off politically charged redistricting battles.

New York already is on track to lose up to two congressional seats during reapportionment due to population decline and slower rate of growth, according to a December report by Election Data Services.

Ocasio-Cortez’s deputy district director Naureen Akhter admitted to The City that there are a lot of illegal immigrants in her district who fear taking the survey.

“We have a high immigrant population, a lot of undocumented folks, a lot of distrust from the community in the government,” the deputy director said.

That is the reason President Donald Trump wanted to add the citizenship question. Illegal immigrants are not supposed to have representation in Congress.

Congress is designed to represent that interest of the United States’ citizens, not anyone who comes in and demands representation.

It is also the reason Democrats fought so hard against the citizenship question and ultimately won, with help from “conservative” Supreme Court Chief Justice John Roberts.

As for Ocasio-Cortez, she has been a headache to the Democrat Party and to her state, pushing Amazon to renege on its decision to bring one of its headquarters there and costing the state tons of jobs and revenue.

She also has gone toe to toe with House Speaker Nancy Pelosi who is the de facto head of the Democrat Party, which is likely why New York Democrats want to get rid of her the easiest way possible.

If only the rest of The Squad could be removed from Congress this easily.