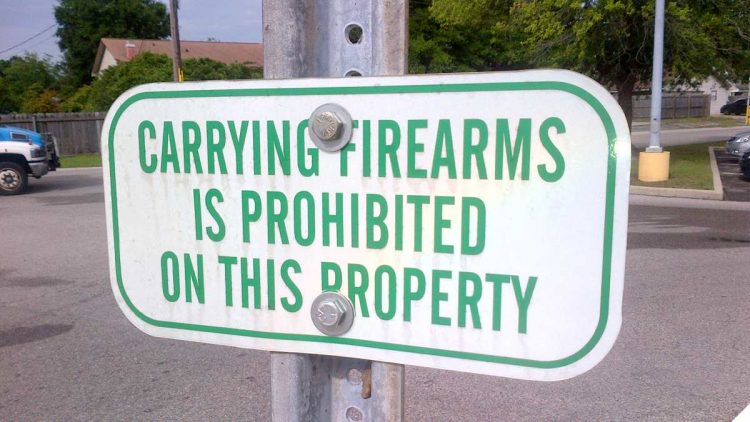 Finally, something that actually makes sense and that I’ve said for a long, long time!  The Minnesota legislature has a bill before it that would allow for armed citizens to be able to sue businesses that declare themselves “gun free zones” if they are disarmed by that business and suffer injuries.

According to the intent of the legislation, “It is the intent of the legislature to balance the right of self-defense of a person who is authorized to carry a firearm under section 624.714 or other law or who is not prohibited under section 624.713 or other law from carrying a firearm with the right of a property owner or entity to exercise control of the property and prohibit the lawful carry or possession of firearms.”

This new bill would change those requirements by adding something new. All notifications now must state that anyone prohibited from carrying a firearm is “under the custodial responsibility” of the business that is banning guns on their premises.

Details of the new bill state that a business or property owners which prohibits the carrying of firearms “shall assume absolute custodial responsibility for the safety and defense of the unarmed person” while the person is on the property.

This proposed change allows a civil recourse option for legally armed citizens being prevented from carrying their firearm into the business or property. This could be any form of injury, including death, or economic loss that could have been prevented if the person had been allowed to carry their firearm.

Although this bill, HF 3051, is only being proposed on the local level in Minnesota; this hopefully would open the door for consideration on the federal level. When legally licensed firearm owners are denied their right to carry, and are then subjected to violence with no way to defend themselves, someone should be held responsible. With this bill, that responsibility now falls on those directly responsible for the disarmament.

This is exactly what is needed.

Too many people want to trample on the rights of others because they believe they are morally superior in that respect.  Yet, they take no initiative to actually provide any semblance of security.

If they are going to require that you be disarmed, then they are making themselves responsible for your well being should criminals enter the establishment.

When they don’t, they are negligent, plain and simple.

There is nothing to fear from those who are morally upright carrying weapons of any kind.

In fact, to be honest, I often ignore establishments that declare I must be disarmed and carry concealed anyways.  After all, I have no intention of committing a crime and should the need arise for me to draw my weapon, I’m sure all will be thankful I ignored such stupidity.

(a) A person carrying a firearm on or about his or her person
or clothes under a permit or otherwise who remains at a private establishment knowing that the operator of the establishment or its agent has made a reasonable request that firearms not be brought into the establishment may be ordered to leave the premises. A person who fails to leave when so requested is guilty of a petty misdemeanor. The fine for a first offense must not exceed $25. Notwithstanding section 609.531, a firearm carried in violation of this subdivision is not subject to forfeiture.

(b) As used in this subdivision, the terms in this paragraph have the meanings given.

(1) “Reasonable request” means a request made under the following circumstances:

(i) the requester has prominently posted a conspicuous sign at every entrance to the
establishment stating that a person prohibited from carrying the firearm is under the custodial responsibility of the requester, according to section 624.7195 and containing the following language: “(INDICATE IDENTITY OF OPERATOR) BANS GUNS IN THESE
PREMISES.”; or

(ii) the requester or the requester’s agent personally informs the person that guns are
prohibited in the premises and demands compliance and that the person is under the custodial
responsibility of the requester according to section 624.7195.

(2) “Prominently” means readily visible and within four feet laterally of the entrance
with the bottom of the sign at a height of four to six feet above the floor.

(3) “Conspicuous” means lettering in black arial typeface at least 1-1/2 inches in height
against a bright contrasting background that is at least 187 square inches in area.

(c) The owner or operator of a private establishment may not prohibit the lawful carry
or possession of firearms in a parking facility or parking area.

(e) This subdivision does not apply to private residences. The lawful possessor of a
private residence may prohibit firearms, and provide notice thereof, in any lawful manner.

(f) A landlord may not restrict the lawful carry or possession of firearms by tenants or
their guests.

(h) This subdivision does not apply to a security guard acting in the course and scope
of employment. The owner or operator of a private establishment may require the display
of official credentials issued by the company, which must be licensed by the Private Detective and Protective Agent Services Board, that employs the security guard and the guard’s permit card prior to granting the guard entrance into the private establishment.

This section is effective the day following final enactment.

It is the intent of the legislature to balance the right
of self-defense of a person who is authorized to carry a firearm under section 624.714 or
other law or who is not prohibited under section 624.713 or other law from carrying a firearm
with the right of a property owner or entity to exercise control of the property and prohibit
the lawful carry or possession of firearms.

(a) A property owner or entity who prohibits
the carrying of firearms by a person who is otherwise authorized to carry a firearm or who
is not otherwise prohibited from carrying a firearm shall assume absolute custodial
responsibility for the safety and defense of the unarmed person while the person is located
on the owner’s or entity’s property that is posted with a sign prohibiting firearms.

(b) The responsibility of the property owner or entity for the safety and defense of any
person who is otherwise authorized to carry a firearm or who is not otherwise prohibited
from carrying a firearm extends to the conduct of other invitees, trespassers, employees of
the person or entity, vicious animals, wild animals, and defensible man-made and natural
hazards.

RELATED:  VIDEO: THE ELITE KNEW MASS UNEMPLOYMENT AND UNREST WAS COMING LONG AGO

(c) For the purposes of this section, the following terms have the meanings given them:

(2) “property” means real property and any appurtenant building or structure.

A person who may otherwise lawfully carry a firearm or who
is not otherwise prohibited from carrying a firearm and who is injured, suffers bodily injury
or death, incurs economic loss or expense, property damage, or any other compensable loss,
that could have been avoided by carrying a firearm, as the result of conduct occurring on
property with a posted written notice that prohibits firearms shall have a civil cause of action
against the owner or entity that exercises control over the property on which the written
notice was posted. In addition to any other damages authorized by law, the person may be
awarded reasonable attorney fees, expert witness costs, and other costs necessary to bring
the cause of action.

The statute of limitations for an action under this section is two
years from the date of the occurrence of the conduct which gave rise to damages under this
section.

Any notice or signage that prohibits firearms as provided in subdivision
3 shall also contain language stating that any person on the posted property who is authorized
to carry a firearm or who is not prohibited from carrying a firearm is under the custodial
responsibility of the property owner or entity that has posted a sign on the property. Failure
of a sign to provide the information required by this subdivision does not reduce liability
for the property owner or entity who exercises control over the property.

To prevail in an action brought under this section, a person must
show by a preponderance of the evidence that:

(1) the person owned a firearm, was otherwise authorized to carry a firearm or was not
otherwise prohibited from carrying a firearm at the time of the incident giving rise to the
action;

(2) the person did not carry the firearm on the property where the incident occurred
because of the written notice under subdivision 5;

(3) the injury, death, economic loss or expense, property damage, or other compensable
loss was caused as a result of the conduct that occurred on the property and could have been
avoided if the person was allowed to carry a firearm onto the property; and

(4) the property owner or entity exercising control over the property was not required
by state or federal law to post the notice, but posted the notice by choice.

This section shall be liberally construed to carry out its purpose.

This section is effective August 1, 2020, and applies to incidents
occurring on or after that date.