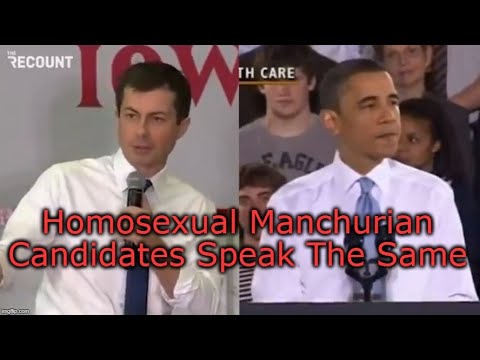 Mayor Pete certainly knows who to copy, but it remains to be seen if Obama’s rhetoric will still be effective in 2020.

As Democrats say, If you ain’t cheatin’, you ain’t tryin’.

Maybe that’s just what Southern Dems say but the strategy seems to hold true for many.

Pete Buttigieg would seem to be no exception.

“Just a thought” and “this country was built” were the more generic phrases that were lined up between the two Democrats, but things get very similar when “church basements” are invoked.

Even more aligned were when Buttigieg and Obama each spoke of the country “shining as a beacon” to the world.

The clip has nabbed nearly 4 million views on Twitter.

Many accused Buttigieg of copying the former president and some had some fun at the expense of the Indiana mayor, including Donald Trump Jr.

“OMG! Its all an act folks… he’s literally acting to try to duplicate Obama for a win…  There is nothing real or organic here, in fact it’s like a scary movie,” Trump Jr. tweeted.

This is more than plagiarism, this is tried and true political strategy.

Buttigieg is actually taking a play out of The Obama Playbook here, sort of.

Mayor Pete is uncloaking before our very eyes.

He says Democrats are in trouble if they choose Bloomberg or Bernie, and he might be right.

But does he offer any great improvement?

I am NOT one of those people who believes Donald Trump can do no wrong.

But facing any of these clowns should be a cakewalk for the President.

Fake News, or Real Scandals, can happen and things can change in a hurry so we shall see.

But I wouldn’t hold your breath for a small city mayor being our next president.

Have you ever wondered how this guy has risen to stardom so quickly?

There are very few real coincidences or flukes in politics.

If you want to learn how, I’d suggest clicking here.