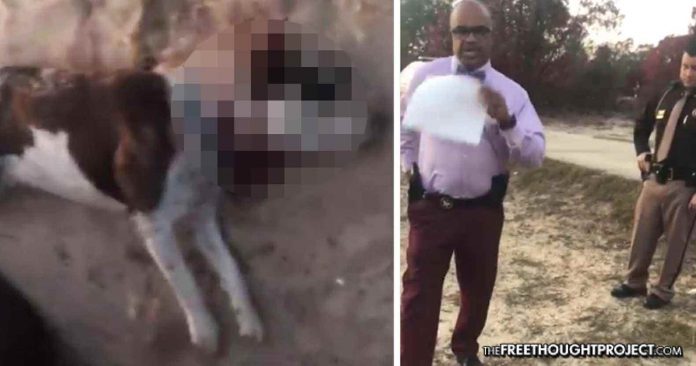 Crawford County, GA — A horrifying video was submitted to the Free Thought Project previously showing two Georgia cops force a father to cut his own dog’s head off because one of them had just shot it. After battling this case for over two years, the innocent father who was forced to do the unspeakable is finally nearing  closure now that a federal judge ruled that his rights under the U.S. Constitution were violated.

The family filed a lawsuit for damages sustained when police shot and killed their dog and then forced the father to cut off its head to bring it to the health department.

“The court agrees that Goodwin was right to be mad and upset when faced with the indignity of removing his pet’s head — clearly a disgusting, humiliating and revolting choice that no one should have to endure,“ U.S. District Court Judge Tripp Self said in the ruling on Friday, according to the Macon Telegram.

Joe Nate Goodwin and his wife, Natasha Dakon filed the lawsuit seeking more than a half-million in damages from that extremely disturbing incident.

“Under extreme emotional duress and distress, and under threat of incarceration and physical harm, Plaintiff Goodwin was forced to decapitate the dog with a knife,” the lawsuit states.

As the AJC notes, in addition to the “great physical and mental pain and suffering,” which has required counseling, Goodwin lost his job as a result of the actions, the lawsuit states.

According to police, Neesmith responded to an alleged complaint about Goodwin’s dog, Big Boy, and when he came on to their property, police say Big Boy “lunged” at the officer. So, Neesmith shot and killed the dog.

Shortly after Neesmith killed the dog, deputy Hollis arrived on the scene and the situation quickly escalated to horrendous levels.

As TFTP reported at the time, Goodwin filmed the incident. The video shows that simply because Goodwin refused to cut off his dog’s head that he was assaulted by a police officer and thrown down on the hood of his truck.

Imagine for a moment, police officers coming on to your property, killing your dog in front of your children, and as you were grieving, they force you to remove its head.

It is important to note that removing the head of an animal is standard procedure for health departments when testing an animal for rabies. However, this is supposed to be done by professionals who know what they are doing—not a dad who just watched his dog get killed.

According to Goodwin, after the officer shot his dog, Hollis, in the purple shirt, showed up and demanded to see the shot records. Goodwin says that although he thinks the dog was current on his shots, he couldn’t immediately produce them. That’s when things turned south.

Instead of simply waiting for Goodwin to produce the shot records, Hollis—clearly confused on how to handle the situation—began to demand that Goodwin cut off his head so they can test it.

Naturally, Goodwin questioned this insanity and, like most people would’ve done in his position, he used choice words to express it. Never once, however, did Goodwin pose a threat or warrant the use of force that was applied to him. In fact, as the law states, Goodwin was in the right to refuse this unlawful order.

“I tell you what,” says the officer as Goodwin refuses to remove his deceased dog’s head. “I will take you to jail and charge you.”

“Charge me with what?” asks Goodwin.

“When I get there, I’ll give you the charges,” says the cop, clearly unable to cite a law that states a person must cut off their dog’s head when told to do so by a police officer.

“What law did I break?” Goodwin asks.

“We asking you to cut…remove the dog’s head,” the officer states as if this is some lawful order.

“I’mma tell you something right now. I’m investigator Hollis. You’re not gonna talk to me nor my deputy like that,” says the officer before assaulting Goodwin and throwing him into his truck.

At this point, the other deputy should’ve moved in to stop the attack, however, he stood by and did nothing.

“We don’t know this process either,” says the deputy who claimed to be animal control earlier in the video.

“If it was my dog, I couldn’t cut the head off either,” says the deputy, clearly showing how wrong this order was.

“I will shoot any dog that comes my way,” he said, noting, “your dog come at me twice.”

“I bet his tail was wagging and everything and your pussy ass did ‘boom,’ it’s all good,” Goodwin said.

As the two officers fumble to do their jobs and try to figure out the law, they eventually force Goodwin to do the unspeakable.

According to Georgia law, Submission of brain tissue for testing must be coordinated with the environmental health section of the county health department and/or animal control agency. This clearly was not happening.

To highlight the sheer ignorance and tyrannical nature of the officers trying to force a man to cut his dead dog’s head off to test for rabies, they ignored the fact that this would also expose Goodwin to the disease. Would these officers have taken responsibility if Goodwin himself would’ve contracted rabies?

Also, according to Georgia law, appropriate protective gear should be used when extracting specimens for laboratory submission to reduce exposure to potentially infectious material. This did not happen.

As for Goodwin, he says he regrets listening to the police as cutting off his dog’s head has left him traumatized. However, he said he did as he was told because he was afraid of being killed or taken to jail—and we call this the land of the free.

Below is a video showing what happens when ignorance, violence, and authority mix.