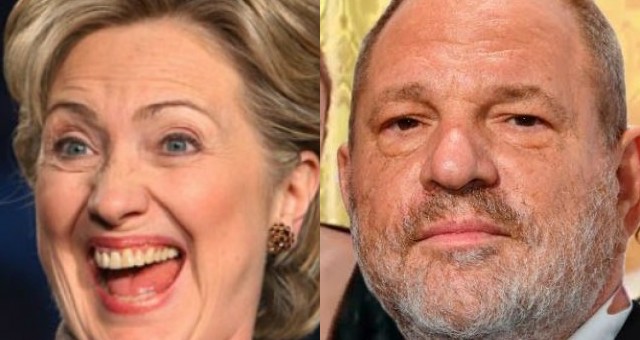 The 67-year-old disgraced movie mogul, who has also been a prominent Democratic fundraiser, was found guilty of third-degree rape and criminal sex act, Fox News reports. He was acquitted of the most severe charges of predatory sexual assault, of which there were two counts, and forcible rape.

“Well, I think that the jury’s verdict really speaks for itself,” she told the audience. “And it is obviously something that people have looked at and followed, because it was time for an accounting. And the jury clearly found that.”

Clinton was then asked about Weinstein’s contributions to her campaign for president and responded: “He contributed to every Democrat’s campaign.”

Clinton, when asked if Weinstein’s contributions to her presidential campaign meant that more scrutiny will be placed on the sources of those donations moving forward, noted that the disgraced Hollywood producer also gave to the campaigns of President Obama, former Secretary of State John Kerry (2004), and former Vice President Al Gore (2000).

“I don’t know if that should chill anyone else from contributing to political campaigns, but it should end the kind of behavior that he was convicted for,” she insisted.

Asked about who she was backing to be the next president, Clinton said her priority was to “retire Donald Trump” and that she would “wait and see who we [the Democrats] nominate,” and would support whoever does eventually take on Trump.

Clinton went onto praise Nanette Burstein, who directed the documentary, which made its world premiere at the Sundance Film Festival.

“I’m really amazed at how they took all this material and turned it into a compelling film,” Clinton said.

“It’s not just about my life, it’s about the arc of women’s lives, about our politics, about all the challenges that any person faces in a lifetime. I am grateful that I have had the life that I have had.”

Federal Election Commission data shows Hillary Clinton and affiliated fundraising groups received at least $54,990.45 throughout her campaigns for Senate and president, from 1999 to 2016.

Weinstein donated more than $72,000 to former President Barack Obama and affiliated parties between 2011 and 2012, data shows.

Trump called the conviction a “great thing” and a “great victory” for women that “sends a very strong message” for the #MeToo movement against that kind of behavior toward women.

“The people who liked him were the Democrats,” Trump continued. “Michelle Obama loved him, loved him. Hillary Clinton loved him.”