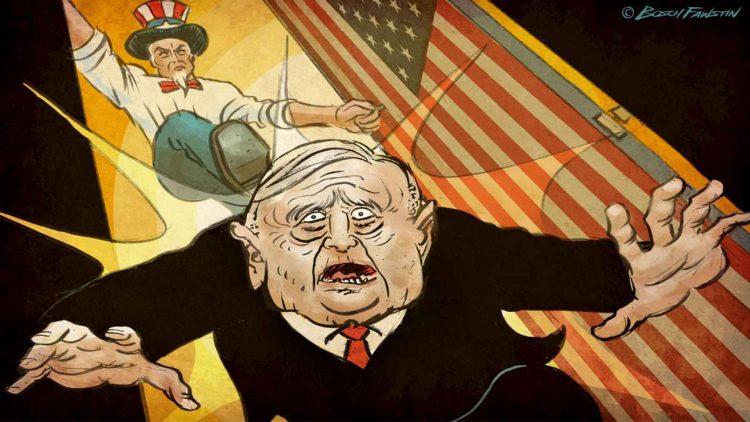 The deportation of a Nazi death camp guard from his residence in Queens, New York, in 2018 by ICE was described as the removal of the “last known Nazi collaborator from the United States.”

That’s not quite true.

There’s another Nazi collaborator living on Fifth Avenue. He’s a billionaire and untouchable because his dubious fortune has been used to finance the Democrat Party, radical leftists, assorted anti-Semites, and opponents of ICE: the agency that should step in to remove the aged Hungarian from the United States.

The legal basis for removing Soros is quite clear.

On 60 Minutes, Soros had admitted working with a Hungarian Nazi collaborator to confiscate Jewish property. While he and his flacks have since tried to spin that admission, the interview is quite clear.

“My understanding is that you went out with this protector of yours who swore that you were his adopted godson, went out, in fact, and helped in the confiscation of property from the Jews,” Steve Kroft asked the radical billionaire.

In his biography, Soros’ father described his son working with a Hungarian Nazi official to inventory the property of a Jewish person. Soros has made that same claim elsewhere. The official, variously named as Baumbach or Baumflass by Soros and his father, both probably fake names, worked for the Hungarian government. This would have been under the Quisling regime of Döme Sztójay.

Horthy, the leader of Hungary for most of WW2, had been an ally of Nazi Germany, but once he saw which way the war was headed, tried to reach a deal with the allies. In response, Hitler occupied Hungary, removed Horthy, and had him replaced with Sztójay. While Hungarian Jews had been persecuted under Horthy, the Holocaust really began in Hungary under Sztójay. An official of a government under Sztójay would qualify under II, III and IV of the Holtzman Amendment.

Soros told Adam Smith’s Money World, a PBS series, “I actually went with him and we took possession of these large estates.”

When Soros originally made these admissions in the nineties, there was little interest in him outside the financial world. As he began using his massive fortune to buy elections, and fund lefty groups hostile to America, Europe, and Israel, there was renewed interest in his wartime activities. His political allies in the media have vociferously condemned any mention of his collaboration and have worked to rewrite history, claiming that these admissions by Soros were poorly worded or taken out of context.

Innumerable fact checks have claimed that Soros was only a frightened little boy hiding out for his life.

These fact checks ignore the simple fact that Soros was not “hiding” by going off to participate in the confiscation of the estate of a Jewish industrialist. Hiding out meant staying out of sight. Soros never actually stayed out of sight while with the Nazi collaborator, he hiked and chatted with friends.

Why did George Soros actually go to the Kornfeld estate?

Tivadar Soros, the billionaire’s father, revealed that, “The following week the kind-hearted Baufluss, in an effort to cheer the unhappy lad up, took him off with him to the provinces. At the time he was working in Transdanubia, west of Budapest, on the model estate of a Jewish aristocrat, Baron Moric Kornfeld. There they were wined and dined by what was left of the staff. George also met several other ministry officials, who immediately took a liking to the young man, the alleged godson of Mr Baufluss. He even helped with the inventory. Surrounded by good company, he quickly regained his spirits.”

Soros did not go to the Kornfeld estate to hide out, but because a Nazi collaborator paid by the Soros family thought that it would cheer him up. He was not a frightened child. And he was not hiding out. Instead, he voluntarily went to the worst possible place that an actual Jew hiding out could possibly be, hanging out with officials dispatched to identify and persecute Jews, because he was having fun.

This matches Soros’ description elsewhere of the period as the “most exciting time of my life”.

Or as he stated elsewhere, “1944 was the happiest year of my life. This is a strange, almost offensive thing to say because 1944 was the year of the Holocaust, but it is true.”

The fact checks claiming that George Soros was a teenager who only did what he had to are false. The account by his father and the circumstances of his collaboration show that he did it for fun.

The claims that Soros collaborated because he was hiding out were disproven by his father’s words.

Soros was a teenager at the time. But the Holtzman Amendment does not set an age limit. And, as an adult, Soros has remained unrepentant, expressing a lack of guilt in the 60 Minutes interview.

There might be a debate about whether a teenager should be punished for his actions during the war. But no one is putting Soros on trial. Courts have held that deportation is not a punishment. As an unrepentant adult, he is eligible to be deported from the United States for his voluntary collaboration in the persecution of Jews because his past renders him inadmissible to remain on American soil.

Since the relevant crime was committed on Hungarian soil, Hungary’s government can request his extradition to face justice. Soros still holds Hungarian citizenship and that is his motherland.

Or he can be deported back to England, where he emigrated to the United States from.

George Soros came to the United States in 1956. At some point, he became a citizen of this country. It is unknown whether he was ever asked about what he did during the war. Such questions often weren’t asked at the time and this allowed many Nazi war criminals to penetrate the United States.

But we do know that Soros had trouble obtaining a visa to originally enter the United States.

Soros obtained his visa under the skilled worker quotas of the Immigration and Nationality Act of 1952. While the bill makes no specific mention of Nazi war crimes, it declares visa applicants affiliated with totalitarian movements ineligible. Arguably, Soros illegitimately procured his visa. And, having done so, he can be denaturalized, and then treated as a deportable alien under the Holtzman Amendment.

Aliens can be deported from the United States, not based on current deportability rules, but those under which they were admitted. In Soros’ case, those would be the 1952 rules of the INA.

If denaturalizing Soros for improperly receiving a visa under INA’s totalitarian alien exclusion seems too challenging, we also know that he was initially turned down for a visa because he was too young to be considered a specialist. He was allowed in only because of an affidavit filed on his behalf by a currency analyst which misrepresented the state of the industry in order to overcome that barrier. A visa based on misrepresentation is invalid. The invalid visa provides grounds for denaturalizing Soros. And his collaboration provides a basis for treating him as a deportable alien and expelling him from America.

Last year, Soros’ Open Society Foundation began taking on denaturalization. Perhaps its founder is worried. He ought to be. His campaign for open borders and his war against immigration laws has backfired and put into place an administration that is determined to end open borders.

And it would only be fitting for the open borders billionaire to end up on the wrong side of the border.

George Soros never paid for a lifetime of misdeeds. And it would also be fitting to start with what may be his oldest crime. The Holtzman Amendment leaves no room for Nazi collaborators in America.

Not even when their billions have funded politicians, judges, organizations, and the Democrat Party.