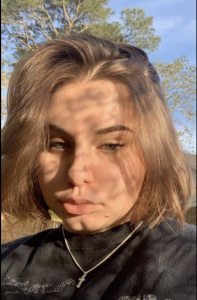 PK NOTE: Their Lives Matter Too. It’s a book you must pick up. Names you’ve never encountered, stories you’ve never read about, all for one, unmentionable reason: black on white murder.

It’s highly probable were her family to read this, they’d be more outraged at us noticing patterns and documenting who/whom murdered Madison Harris than with her death itself.

She was a white teenager, living in the post-racial society of Biloxi, Mississippi, where integration had occurred and members of the white working-class were beginning to emulate in dress and speech (increasingly in appearance) the culture of blacks.

Five blacks have now been arrested and charged in her murder during a robbery attempt. They were all teenagers. [Five teens charged with capital murder in death of 16-year-old Biloxi gir l, WLOX.com, February 25, 2020]:

Five teenagers are now charged with capital murder in the death of a 16-year-old Biloxi girl.
The five juveniles were arrested Monday shortly after the shooting and accused in the death of Madison Harris.

The teenagers are identified as follows: Yakeshia L. Blackmon, 17; Willow O. Blackmon, 15; Jasmine Joy-Sade Kelley, 15; Jarvis Jermaine Cook, 17; and Jaquez Devonte Porter, 17.Police say the five Biloxi teens attempted to use a gun to rob Harris at a home in the 2000 block of Rustwood Drive, which is located just off Popps Ferry Road. An altercation took place and Harris was shot, said authorities.

The five juveniles fled in multiple directions, leading police to canvas the neighborhood looking for them. Witness statements and evidence found at the scene of the murder led investigators to locate all five suspects shortly after the shooting and piece together what happened to Harris.

A $1 million bond was set for all of the suspects except Jarvis Cook, who was already out on bond for an aggravated assault he is accused of committing last year in Gulfport. Cook is being held without bond.

We aren’t supposed to notice Madison Harris was a white female, and her five killers are black. In fact, in the current year, to notice such racial realities behind this murder is a far graver sin than the murder of Ms. Harris itself.

Nonetheless, Her Name is Madison Harris. Were the races reversed, your death would be a national story, with the media trying to find ways to connect this modern-day lynching to Emmett Till.

As is it, few outside of Biloxi and those reading piece will ever stumble across how you died and who/whom took your life.There is no double standard in America, only The Standard, dictating white people have no collective interests or concerns, and that violent interracial crime can only be reported if a white person (thereby all white people in the USA are guilty) is the suspect.

And remember: Their Lives Matter Too.